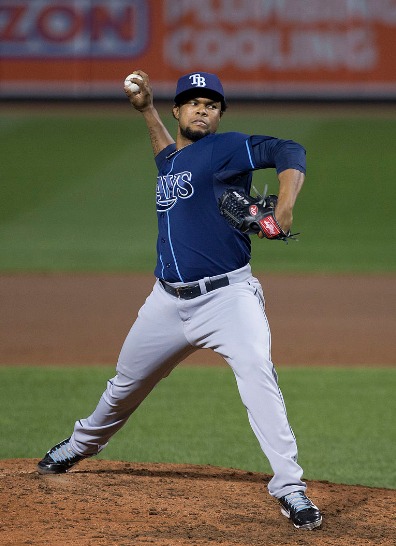 In a bit of a surprise move, Rays third baseman Evan Longoria was denied a spot on the All-Star team with closer Alex Colome apparently was a better fit for American League/Royals manager Ned Yost.

Colome has converted all 19 save chances, fifth most in the AL, with a stellar 1.76 ERA since taking over closing duties for the injured Brad Boxberger, who was injured in March,

“It’s something crazy,” Colome said. “In spring training I never think about being in the All-Star Game. I don’t know what I’m doing. Boxberger is closing, I take maybe the eighth (inning), the seventh. And I have the opportunity to take the closer (role) and do the job.”

Manager Kevin Cash said he has been impressed with how Colome has progressed since moving from the starting rotation to the bullpen during last season, evolving into “elite status,” and how he has done it.

“I think that’s awesome. Very much earned for Alex, a guy that has come through the system and has really taken to his role,” Cash said of the choices. “As far as for Evan, I think it’s an honor to be in that top five. I hope our fan base and people outside of our fan base understand what type of year he’s having and can vote him in there. We feel he’s definitely worthy.”

Fans defended Longoria’s bid for a fourth all-star selection, hitting .278 with 18 homers and 45 RBIs. Baltimore’s Manny Machado was elected the starter and Toronto’s Josh Donaldson chosen by the players, so Longoria’s fate rested with Yost, who consults with MLB officials.