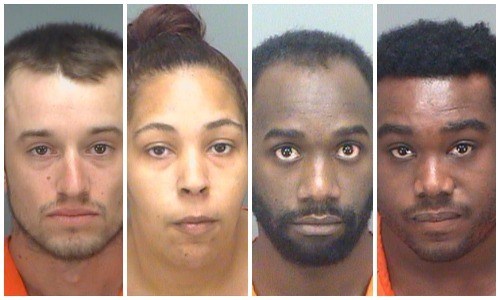 Police details some of the looting and riot arrests from early Tuesday, listing Lady Nicole Nash, Javonta McCloud, and Eddie Bryant among those charges with inciting a riot. Anthony Koedel was arrested for organizing the attack as a “protest” but the event quickly turned violent and dangerous.

Koedel, 29, of Tampa, was arrested early Tuesday on a felony charge of inciting a riot after organized the past three days of protests against police. Koedel was arrested at about 1:17 a.m. at 1301 First Ave. N, outside St. Petersburg Police Department headquarters, where demonstrators have repeatedly protested in recent days and nights.

Police arrested Nash, 29, McCloud, 28, and Bryant, 28. They were all charged with inciting a riot. Officers found weapons inside of the SUV with the three people arrested. Those items include a gas canister, glass bottles, bricks, a bag of large rocks and a metal pipe.

Koedel has been organizing protests on Facebook, broadcasting them on Facebook Live, according to St. Petersburg police.

The arrest report notes that objects have been thrown at officers, rocks and bottles were thrown at the police building and the window of a cruiser was smashed.