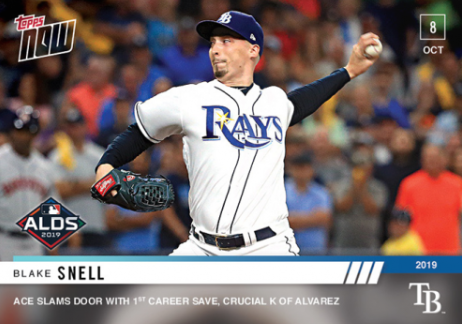 Tampa Bay Rays star Blake Snell says he will not play this season for a reduced salary, especially because the risk of coronavirus, the potential lifetime damage, is “just not worth it.”

Snell posted to social media yesterday about Major League Baseball’s reported proposal of a 50-50 revenue split with the players for a shortened season.

“Y’all gotta understand, man, for me to go — for me to take a pay cut is not happening, because the risk is through the roof,” Snell said while answering questions on his Twitch channel. “It’s a shorter season, less pay.

“No, I gotta get my money. I’m not playing unless I get mine, OK? And that’s just the way it is for me. Like, I’m sorry you guys think differently, but the risk is way the hell higher and the amount of money I’m making is way lower. Why would I think about doing that?”

Snell, who was scheduled to earn $7 million in 2020, later told the Tampa Bay Times via text messages about coming across as greedy: “that’s not the case at all” and his concerns are rooted more in the health and safety issues.

“I mean, honestly, it’s just scary to risk my life to get COVID-19 as well as not knowing and spreading it to others,” he said via text. “I just want everyone to be healthy and get back to our normal lives ’cause I know I miss mine!”

Snell even mentioned sitting out if the plan moves forward.

“I honestly think I would see what my peers did and talk to my loved ones before I made a decision because I really do wanna play baseball and be around the family we have built here in Tampa. It’s just a hard time with a lot going on to make it even harder.”

Snell on the salary cut:

“If I’m gonna play I should be getting the money I signed to be getting paid,” Snell said. “I should not be getting half of what I’m getting paid because the season’s cut in half, on top of a 33% cut of the half that’s already there — so I’m really getting, like, 25% — on top of that, it’s getting taxed. So imagine how much I’m actually making to play, you know what I’m saying?

“Like, I ain’t making s–t. and on top of that — so, all that money’s gone, and now I play risking my life. And if I get the ‘rona — on top of that, if I get the ‘rona — guess what happens with that? Oh yeah, that stays, that’s in my body forever. That damage is not gonna be like — the damage that was done to my body? That’s gonna be there forever.”