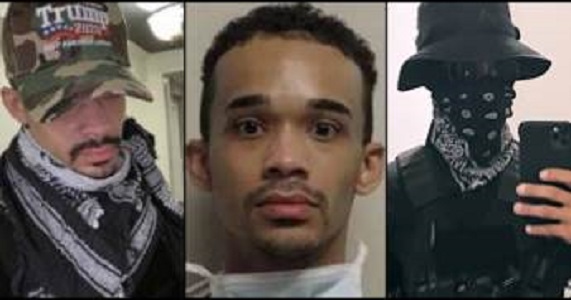 A leftist activist, Black Lives Matter protester, John Sullivan misled Fox News, CNN and other media outlets about his role in the pro-Trump riot at the Capitol on The Sixth. Sullivan has been arrested by charged, according to the U.S. Justice Department.

Sullivan, a.k.a. Jayden X, is a “civil rights activist and crowdfunded video journalist,” according to Rolling Stone, told rioters that “We got to get this s— burned,” and “it’s our house m————,” according to an affidavit signed by FBI Special Agent Matthew Foulger.

He also told Foulger that he had been in the Capitol during the riot, entering through a broken window while wearing a ballistic vest.

As protesters climbed over a wall near the Capitol entrance, he allegedly exclaimed in the video, “You guys are f—— savage. Let’s go!”

“There are so many people,” Sullivan’s voice can be heard saying as the camera shows a large group of people making its way toward the building. “Let’s go. This s— is ours! F– yeah. I can’t believe this is reality.”

“We accomplished this s—,” he said at another point “We did this together. F— yeah! We are all a part of this history.”

Trump Supporters Breach the Wall of police and storm the front steps of the #usacapitol #DCProtests #DC pic.twitter.com/zBY8Dj1QQN

Other videos show Sullivan helping a person climbing over the Capitol walls and then entering the Capitol through a broken window, the charges state.

“In at least two encounters, Sullivan can be heard on the video arguing with the officers, telling them to stand down so that they do not get hurt. Among other things, Sullivan can be heard telling officers, ‘You are putting yourself in harm’s way,’ ‘The people have spoken,’ and ‘There are too many people, you gotta stand down, the people out there that tried to do that (expletive), they got hurt, I saw it, I’m caring about you,’” according to the charges.

In another video, Sullivan is heard telling other protesters that he has a knife, the charges state.

While talking with CNN’s Anderson Cooper, Sullivan confessed to telling police to let protesters and rioters into the Capitol, the fatal shooting of Ashli Babbitt, and how he pretended to be a pro-Trump supporter in the chaos.

VIDEO HERE: Sullivan can be heard telling the officer that they will make the path, he doesn’t want to see people get hurt (1:27), ahead of the gunshot, Sullivan may be the person yelling “No,” “There’s a gun” before the officer kills Babbitt.

During an interview with Rolling Stone published Wednesday, Sullivan said he was putting on an act to build rapport with the protesters.

“I had to relate to these people, and build trust in the short amount of time I had there to get where I need to go,” he told the magazine. “To the front of the crowd to see the dynamic between the police and the protesters, because nobody wants to see the backs of people’s heads from a far-off distance.”

“I was there to record,” said Sullivan in a video posted to Periscope Friday. “I was there to let people see that situation in the best possible way.”

Sullivan is also a founder of Insurgence USA and faces charges from a counter protest this summer.

During that incident he was captured on video threatening to beat a woman in an SUV and then kicking her door, leaving a dent, according to the affidavit. He was charged, because he’s on video with Jesse Taggart, the man charged with shooting the motorist.

He was charged Thursday in federal court in Washington after being arrested by the FBI.  Sullivan remains in custody in Toeele County, in his home state of Utah, on a U.S. Marshals Service hold request.

Unseen footage of after the killing of a protester during the #Stormingofthecapitol in #dc pic.twitter.com/lvnOWDtDVE