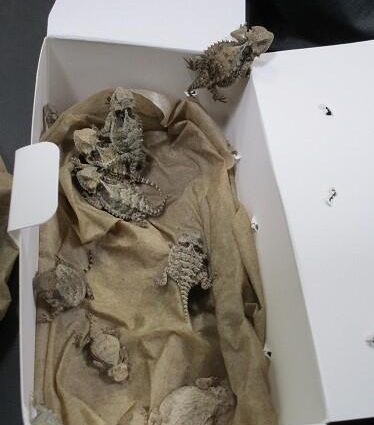 U.S. Customs and Border Protection officers at the San Ysidro port of entry thwarted a significant smuggling attempt after discovering 52 reptiles, tied up in small bags and hidden in and under a man’s clothing as he tried to cross the border into the U.S.

The incident occurred at about 3 a.m., on February 25, when CBP officers encountered a 30-year-old male U.S. citizen, driving a 2018 GMC truck and arriving at the San Ysidro border crossing.

The CBP officer referred the driver and the vehicle for further inspection.  During the examination, a personal search of the driver was conducted and CBP officers found several bags of live animals.  CBP officers removed a total of 52 bags of reptiles, later identified as 43 horned lizards and nine snakes, which were concealed in the man’s jacket, pants pockets, and groin area.

“Smugglers will try every possible way to try and get their product, or in this case live reptiles, across the border,” said Sidney Aki, CBP Director of Field Operations in San Diego.  “In this occasion, the smuggler attempted to deceive CBP officers in order to bring these animals into the US., without taking care for the health and safety of the animals.  CBP enforces hundreds of laws at the border for more than 40 different government agencies, in part to help stop smuggling attempts like these which can lead to trafficking of possibly endangered species.”

“This seizure is the direct result of a coordinated investigative effort by Homeland Security Investigations (HSI) San Diego, U.S. Fish and Wildlife, and Customs and Border Protection,” said Chad Plantz, Special Agent in Charge for HSI San Diego.  “HSI will continue to aggressively investigate individuals who are involved in the unlawful smuggling and trafficking of endangered wildlife for their own financial gain.”

“One of the highest priorities of the U.S. Fish and Wildlife Service Office of Law Enforcement is to investigate individuals involved in the unlawful commercial trafficking and smuggling of wildlife here and around the world,” said acting Resident Agent in Charge Ed Nieves.  “We would like to thank our partners at HSI, the U.S. Attorney’s Office and many others for their cooperative assistance to hold this individual accountable and help protect wildlife species for future generations.”

CBP officers arrested the driver for the live reptiles smuggling attempt and turned him over to the custody of Immigration and Customs Enforcement (ICE), Homeland Security Investigators (HSI) and Fish and Wildlife Services (F&WS) for further processing.  The driver was later transported and booked into the Metropolitan Correctional Center.