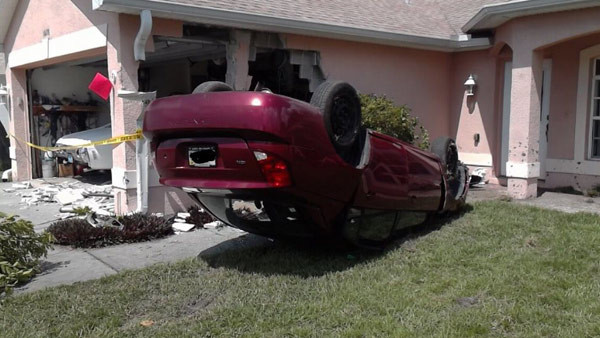 A Spring Hill teenager lost control of a car and crashed it into a home Friday afternoon, according to the Florida Highway Patrol. Police now identify the girl as Brianna Nicole Jurkofsky, offering a few more details about the crash.

Jurkofsky, 17, was driving a Saturn going north on Gifford Drive with two other teens in the car: William Barton, 16, and Kailey Brummett, 17.

The crash happened around 3 p.m. near Gifford Drive and Belltower Street when Jurkofsky didn’t stop at the stop sign and went through the raised intersection at high speed.

The Saturn bottomed out rupturing the car’s oil pan and damaging the pavement on the roadway. Jurkofsky lost control of the car, it flipped and spun, hitting two mailboxes and crashing into a house nearby.

Fox 13 reported how the homeowner was on the couch, just feet from the impact site at the time.

“I heard this tremendous ‘crash’ I said to my friend, ‘I’ll call you back. I think a car hit my house.’ I look outside, it was upside down and everyone was scrambling,” recalled Jean Fedoryk to Fox in their Saturday report. “I tried to call 911. I was so nervous, I couldn’t dial.”

Jurkofsky and her passengers suffered non-life threatening injuries and were taken to Oak Hill hospital. CORRECTION: One passenger was taken to Bayonet Point Hospital.

FHP noted that Jurkofsky and Barton wore seatbelts, Brummett didn’t have hers on. The house and the two cars parked in the garage were damaged.

Alcohol is not believed to a factor, but FHP said speed likely was. Jurkofsky faces careless driving charges