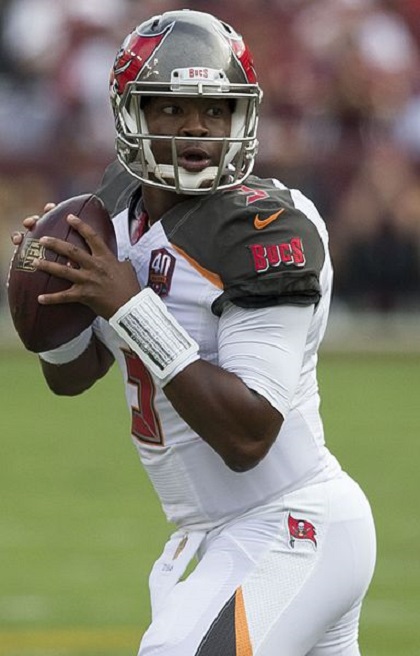 Bucs News: Gerald McCoy talks Jameis Winston’s call for change, being the ‘Face of the Franchise’

Bucs quarterback Jameis Winston vowed that there would be changes at the end of the 2015 season, and now Gerald McCoy said he and Winston talked and have a plan.

“Me and Jameis had a private conversation about what he feels like this team needs me to be as a leader,” said McCoy, adding that he has no problem granting the requests (which he did not disclose.)

“Because the face of the franchise came to me and said, ‘hey listen, if we are going to win, we need you to do this,'” said McCoy. “My quarterback said this is what he needs, so that is what I’m going to do. Because if he feels like this is what our team needs to win, who am I to tell him I’m not going to do that? Because I want to win, too.”

Winston dropped the remarks back on January 4: “I know everyone on this team wants to win. It’s just the way that you do it, the preparation. It’s just having that mindset of, ‘I want to win at all costs.’ Like I said, that has to be developed and molded into you.”

McCoy has enjoyed just one winning season since being drafted by the Bucs and wants to win.

“Internally, you won’t see it, but game day, you might see it,” said McCoy.

“You may even see it during training camp. It’s not a very big thing. He just told me privately, so I won’t speak about it. That’s all it is. It’s not like, wait till you see this. It’s not that big a deal. Believe me. But he spoke with me privately, so when it happens it will be obvious, ‘oh, that’s what he was talking about.'”

McCoy is in full support of the quarterback, calling him the “Face of the Franchise.”

“I refer to him as the face of the franchise because he is,” said McCoy. “When they show commercials of the Bucs, they aren’t showing Gerald, they are showing Jameis. That is for a reason. And I am happy about that. Because if your quarterback is the face of the franchise, usually that tags to winning or going in a positive direction. I am excited about it. Passing the torch? Ronde gave me the torch. I didn’t ask for it. He passed it to me. Here you go Jameis! Take us to the Super Bowl!”

2016-07-28
Previous Post: Crystal River woman, Megan Jones, arrested for ‘biting off part of the lip’ of her babysitter
Next Post: TGH named one of the nation’s ‘Most Wired Hospitals’ four years running