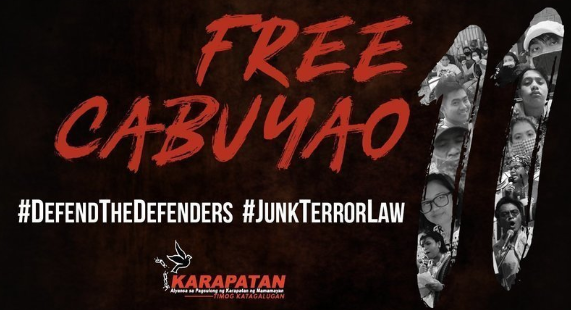 On July 3, 2020, Philippines President Rodrigo Duterte signed into law, Republic Act No. 11479 aka the Anti-Terrorism Act of 2020 which is intended to prevent, prohibit and penalize terrorism in the country.

The law replaces replaces the Human Security Act of 2007.

“Under Duterte’s presidency, even the mildest government critics can be labelled terrorists.

“This administration has effectively crafted a new weapon to brand and hound any perceived enemies of the state. In the prevailing climate of impunity, a law so vague on the definition of ‘terrorism’ can only worsen attacks against human rights defenders.

“The approval of this law grants the government excessive and unchecked powers. Legislation aimed at ‘countering terrorism’ must ensure respect for international human rights and humanitarian law and protect basic liberties.

“This law’s introduction is the latest example of the country’s ever-worsening human rights record. Once again, this shows why the UN should launch a formal investigation into ongoing widespread and systematic violations in the country.”

Amnesty International has called on the Philippine government to reject this legislation that contains dangerous provisions and risks further undermining human rights in the country.

The law is currently being challenged in the Supreme Court by a group led by Howard Calleja, the De La Salle brothers led by former education secretary Brother Armin Luistro and other civic groups.

On July 4, 2020, a day after President Rodrigo Duterte’s signature is affixed on the widely-opposed Anti-Terrorism Act of 2020, state forces under the 2nd Infantry Division of the Philippine Army (2ID) and the Cabuyao City Police Station (Cabuyao CPS) arrested 11 activists after their protest.

The eleven activists were part of a larger delegation conducting a peaceful protest to condemn the passage of the Anti-Terrorism Bill, which they said “would lead to abuse and widespread arrest of activists.”

Three minors were among those arrrested. Others arrested are:

According to a Change.org petition, the 11 activists, which are leaders and members of Bayan, Karapatan, GABRIELA and PAMANTIK-KMU were manhandled, dragged and choked by elements of the 2ID, camping inside the Barangay Hall of Pulo in Cabuyao City, suffering wounds and bruises from the rough accosting. They were then brought to the Cabuyao CPS even without cases filed against them.

The arrest puts into question the numerous safeguards trotted about by the Anti-Terror Act’s principal authors, the military, and police, mounting further concern and criticism against the bill in the midst of the COVID-19 pandemic.

The Act defines terrorism as:

Under the law, persons who propose, incite, conspire, and participate in the planning, training, and facilitation an offence under the act, as well as those who provide support to ‘terrorists’ as defined under the act, or recruit members of a ‘terrorist organisation’, could face life imprisonment without parole.

The law also punishes the following offences with 12 years’ imprisonment:

The law allows suspects to be detained without a judicial warrant of arrest for 14 days and can be extended by 10 more days, and placed under surveillance for 60 days, that can also be extended by up to 30 days, by the police or military.

2020-07-06
Previous Post: ‘Phineas and Ferb The Movie: Candace Against the Universe’ set for Disney+ in August
Next Post: US ‘revolutionaries fighting for socialism’ join Hezbollah, Hamas terrorists, condemning Israel annexation