California voters will decide in November whether governments and public colleges and universities can consider race in their hiring, contracting and admissions decisions, possibly ending affirmative action rules.

The state Senate voted 30-10 on Wednesday to repeal that amendment, which still requires the approval of voters in November.

Sen. Scott Wilk of Santa Clarita was the only Republican to vote for the repeal.

Sen. Steven Bradford, a Democrat from Gardena who is Black, called out some of his white colleagues who he says “have never hired a black person, and probably never will.”

Repealing Prop 209 will ALLOW race to matter in decisions of contracts and college admissions.

Most critics point to the unfair burden the move will place on the Asian Americans.

“We cannot do right by doing wrong. We should not try to help African- Americans by removing college admissions from Asian-Americans. Those who wish to do so ignore this inescapable fact. We, however, cannot disregard the truth that granting preference in admission to African-Americans at UC means depriving and discriminating against Asian-Americans and others,” the article in OCRegister notes.

Below is the News Talk conversation about the move.

California Proposition 16, the Repeal Proposition 209 Affirmative Action Amendment, is on the ballot in California as a legislatively referred constitutional amendment on November 3, 2020. 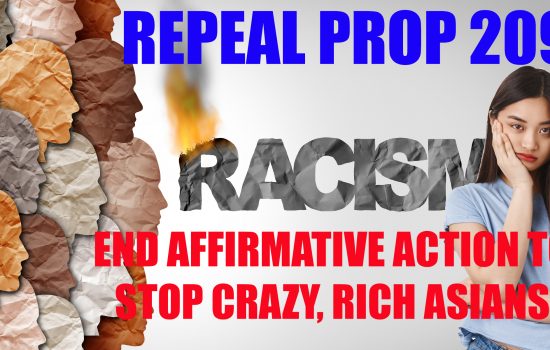