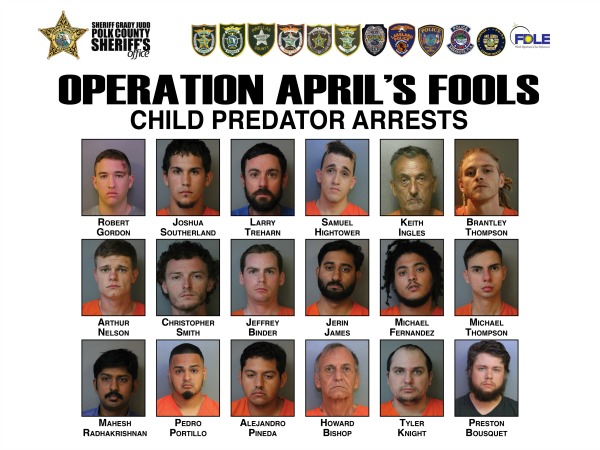 In an undisclosed location in Polk County, beginning on Tuesday, March 29, through Monday, April 4, 2016, Polk County Sheriff’s undercover detectives, along with detectives and investigators from other agencies, conducted a week-long undercover investigation targeting online child predators and arrested 18 suspects.

“This is why we are proactive and conduct operations like this one. We have to search out these predators before they get to our children. Any child with a social media device means a predator has access to that child. Even more importantly, parents need to work with us to protect them.” – Sheriff Grady Judd

During the operation, undercover detectives posted fictitious ads or profiles on various social media platforms, websites, and mobile phone applications, posing as children, or as custodians of children. Despite the repeated warnings and media coverage of past operations, numerous men responded to the ads and then proceeded to chat online, email, text, and talk on the phone with the undercover detectives who posed as children or custodians of children online. Some of the detectives responded to profiles and online ads. The suspects solicited who they thought were children as young as 13 years old for sex acts; two suspects solicited who they thought was the father of a 10-year-old girl to have sex with her. Some suspects sent pornographic pictures of themselves, and some asked for nude photos of the children to be sent to them. Several of the men drove to the house to follow through with the promises made online to engage in sexual activity with the juveniles.

The 18 suspects face a total of 103 charges (97 felonies, 6 misdemeanors) which range from: Attempted Lewd Battery, Use of Computer to Seduce a Child, Transmission of Harmful Material to Minor, Use of a Two-Way Communication Device to Commit a Felony, Traveling to Meet Minor, Possession of Firearm During Commission of Felony, Drug Possession, and Possession of Drug Paraphernalia. More charges are pending further investigation of these suspects’ phones, computers, etc.

Nine (9) suspects brought condoms, some brought candy, and some brought illegal narcotics to the undercover location. Five (5) told detectives they were married. The youngest suspect arrested was 19 years old, and the oldest suspect arrested was 60 years old – the average age of the suspects is 28 years old. Including the charges they face in this investigation, the suspects have a combined arrest history of 24 previous felonies and 24 previous misdemeanors.