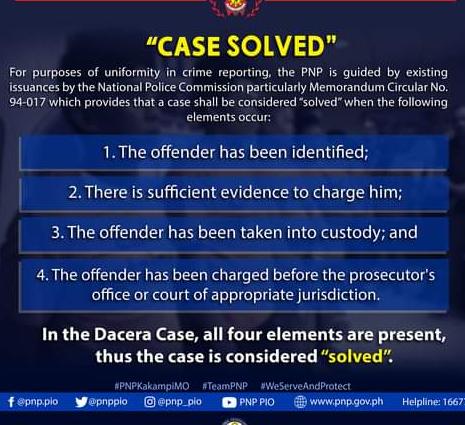 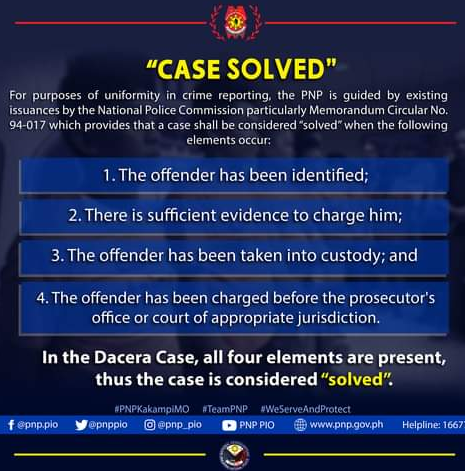 Philippines National Police (PNP) said yesterday the case was solved: Three suspects are in police custody for alleged involvement in the rape-slay of Dacera.

Sinas said, nine other persons who were with the victim during her stay at the City Garden Hotel are being sought by the Makati City Police.They are: 1) Gregorio Angelo de Guzman; 2.) Louie de Lima; 3.) Clark Jezreel Rapinan; 4) Rey Englis; 5) Mark Anthony Rosales; 6) Jammyr Cunanan; 7) Valentine Rosales; 8.) a certain Ed Madrid; and 9.) a certain Paul. All remain at-large and are now the subject of follow-up operations.

Initial investigation showed the victim and the suspects were at a New Year’s Eve Party at the City Garden Hotel located at the corner of Makati and Kalayaan Avenues in Barangay Poblacion, Makati City.

At past noontime of January 1, the victim was found unconscious in the bathtub of her hotel room. Hotel staff performed CPR on the victim to revive her but failed, and later rushed her to the hospital where she was pronounced dead by doctors.

The Philippines Commission on Human Rights said they would be conducting their own investigation.

Atty. Jacqueline Ann de Guia said in a statement: While preliminary investigation by the Philippine National Police showed that the cause of death was due to ruptured aortic aneurysm, visible lacerations and other evidence based on the medico-legal report points to factors of abuse, which include forcible sexual misconduct.

As one of the sectors who most experience abuse, the government must ensure that greater protection be accorded to women. In this regard, CHR stands for the protection of women in all fronts of life and echoes the call for justice for Christine Angelica Dacera.

We send our sincere condolences to the bereaved loved ones and family members of the deceased.

This case cannot be regarded as solved until justice has already taken its due course and that the perpetrators are held to account. 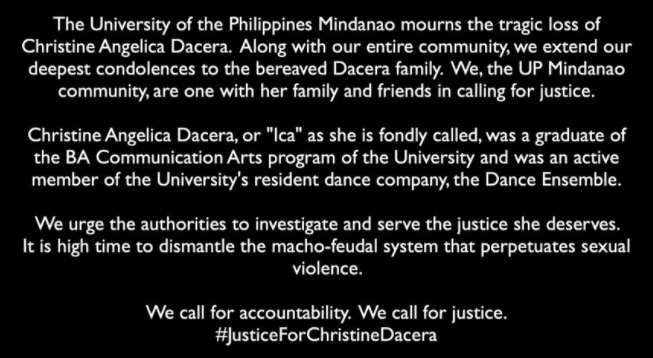