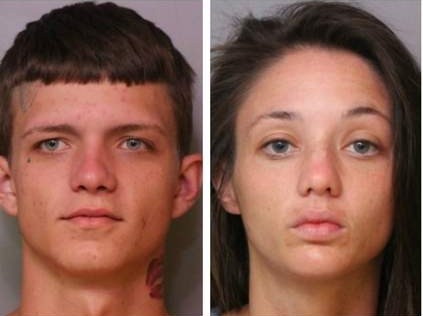 The couple attempting to run from a Polk County sheriff’s deputy, but rammed their vehicle into his cruiser, dragging the patrol car into a ditch, have been identified.

Cody Bridges, 19, of Plant City, was being sought for a felony warrant out of Hillsborough County for a stolen vehicle, according to the Polk County Sheriff’s Office. When Deputy Sheriff Steven Britten arrived in Lakeland on Friday, Britten saw the vehicle Bridges was last known to be driving: a white Ford Fusion.

Britten identified the driver as Melanie Haygood, 24, of Lakeland, another person being sought in connection with other crimes.

Other deputies in the area located the Ford Fusion heading westbound on Pipkin Road, and they began pursuing the vehicle with lights and sirens, but Haygood did not stop, according to the Polk County Sheriff’s Office.

The chase led deputies into Hillsborough County, and at the intersection of Highway 92 and Park Road in Plant City, Haygood lost control of the vehicle.

Bridges was identified as the passenger in the vehicle with Haygood behind the wheel, both of whom fled on foot. With the assistance of a police dog, both were quickly apprehended.

The Lakeland Ledger noted in their coverage that “Two bags of methamphetamine were found in the Fusion, along with two needles, three containers, a bag of synthetic marijuana, a scale and a spoon, according to the Sheriff’s Office. In the center console of the vehicle, deputies found .40 caliber ammunition, two credit cards and a driver’s license.”

This evidence was linked to a burglary in Lakeland in which Bridges is a suspect, according to PCSO.

Bridges was arrested and charged with six felonies — including grand theft of a motor vehicle — and one misdemeanor.

Haygood was charged with seven felonies — including aggravated battery on a law enforcement officer, grand theft of a motor vehicle and possession of methamphetamine — and three misdemeanors.

Both Haygood and Bridges remain in Polk County Jail.