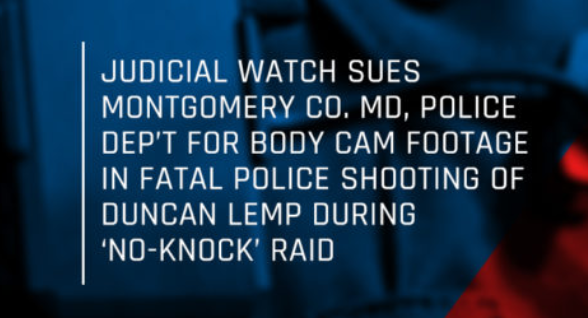 On March 12, 21-year-old Duncan Socrates Lemp of Potomac, Maryland was shot and during a no-knock police raid by the Montgomery County Police Department’s (MCPD) SWAT team.

The MCPD said in a statement that SWAT team officers were acting on an anonymous tip that Lemp was in possession of firearms that he was prohibited from having “due to his criminal history as a juvenile.”

The MCPD maintains that, upon making contact with Lemp, officers identified themselves as the police and gave Lemp multiple orders to show his hands and comply with the officer’s commands to get on the ground. It also reportedly maintains that Lemp refused to comply with the officer’s commands and proceeded towards an interior bedroom door where other officers were located.

Lemp’s family reportedly said that Lemp and his family were asleep “when police besieged the residence from the front of the house” and the family was “awakened by shots fired through Duncan’s bedroom window followed by the sound of flash bangs.” According to the family’s attorney, an eyewitness said Lemp was asleep in his bedroom when police opened fire from outside the house.

All body-worn camera videos relating to the raid on, and resulting death of, Duncan Socrates Lemp by a Montgomery County Police SWAT team on March 12, 2020 at Mr. Lemp’s home in Potomac, Maryland.

“Given the vastly differing accounts of what happened, the Montgomery County Police Department needs to release all body-cam footage from the SWAT team raid on and shooting of Duncan Lemp,” said Judicial Watch President Tom Fitton. “Withholding basic public information about a police shooting undermines public confidence in law enforcement.”

2020-10-14
Previous Post: Military votes could decide 2020 election: Study
Next Post: Ibuprofen, other NSAIDs, taken in second half of pregnancy could lead to complications