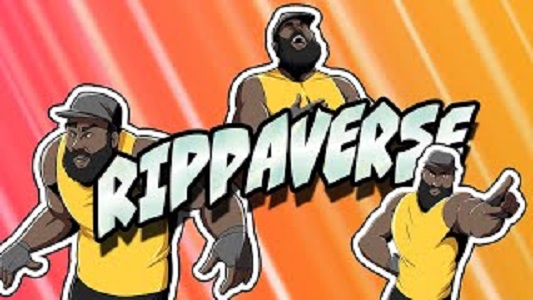 “As of Monday, book number one has already been shipped to our printer,” July announced, noting that they’ll be doing some “proofing this week” to the undisclosed print run of issues, which will launch the new comic book line.

The first book will be 100 pages, all by the same artist, written by July.

At the beginning of their conversation, July pointed to his passion for comics and the interconnected universes (e.g. DC, Marvel) as the motivation to create this new alternative.

“…What I’m trying to come up with here is a ever expanding connected universe, where continuity matters, where…this is what got me into comics…that there was all these characters, maybe they didn’t all know each other, but it was a cool thing that all of these characters existed and there was always that wonder that they may cross paths or something which may have appeared in this book would matter to another character.”

Later, the Rippaverse is revealed to branch out from this first main character, with others getting their own titles, according to July.

“It serves as a launching pad for this universe…for branches of story, where we’ll be able to go with it,” he says.

July explained his marketing aspirations and how he will be targeting the audience of traditional fans of the DC Universe and Marvel Universe, as well as his ever-growing YouTube and social media fans and audience members.

Unlike Indiegogo or Kickstarter campaigns where the funds are raised and then the product is created, Eric July and his team “gauged the enthusiasm” and invested his own funds to kick off the comic book series. Therefore, unlike most other comic book crowdfunding campaigns, July will have the books in hand when those campaigns are started and backers will receive their comic book quickly.

“I’m going all in. Let’s do this. If I’m doing it, I’m doing it right,” he told Van Sciver enthusiastically, detailing the process of storing the comic books, thoughts on a second printing if they sell out and connecting to the customers.

Later July explained why the title is still secret, teased crowdfunding through his own website, not just on the aforementioned sites, “there will be a public revenue” outlet to maintain “transparency” and how he wants to let customers “see what we’re doing.”

July is a libertarian content creator, gamer, musician and social commentator, who has spoken out regularly against the social justice warriors in comic books, their narratives and virtue signaling, which have changed traditional characters.

“Since I was in my early 20s I’ve been spreading the truth and speaking out against oppression without censorship or criticism,” July says on his website’s bio page.

Van Sciver is a renown comic book creator (Green Lantern, New X-Men), who has ignited the Independent comic book marketing with his Cyberfrog line, a character he created and first published in 1994. Now with crowdfunding and his YouTube audience, comic book creators have carved out a unique business model, supplanting the monopoly held by Marvel and DC, raising and selling millions in new comic books.