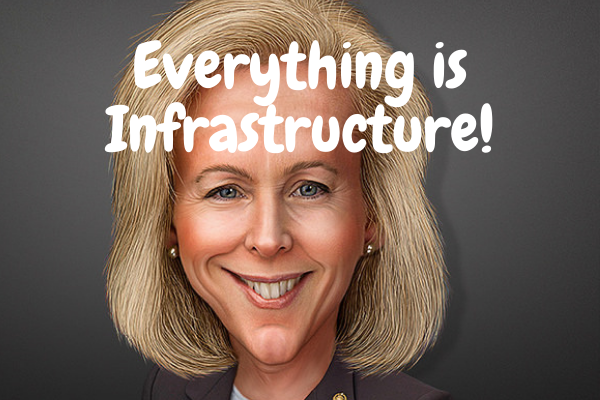 Everything is infrastructure: Kirsten Gillibrand redefines the word

The progressive left has a long history of redefining words to meet some larger, insidious government policy goal.

The propagandization has included pro-choice or reproductive health as a more comforting replacement for pro-abortion or undocumented immigrant in place of  illegal alien.

Despite the softer sounds, it hardly changes the reality of killing an unborn child or someone breaking our laws and disrespecting the sovereignty of our country, respectively.

Recently, President Joe Biden introduced a $2 trillion -plus infrastructure plan. About half of Biden’s plan goes toward traditional infrastructure.

In addition to the standard infrastructure items like fixing highways, rebuilding bridges and upgrading ports and airports, Biden’s costly plan includes solidifying the infrastructure of our care economy by creating jobs and raising wages and benefits for essential home care workers and investments to reduce climate change and various social equity programs.

The latter proposals will clearly cause Biden trouble in the Congress because they are not truly in the realm of infrastructure.

According to New York Senator Kirsten Gillibrand, anything and everything is infrastructure. In a tweet yesterday, Gillibrand said:

Huh? This is the latest leftist redefinition of standard terminology. We should expect more and be ready to counteract this foolishness with sanity and clearness of thought.

1984 author George Orwell once wrote: “Political language … is designed to make lies sound truthful and murder respectable, and to give an appearance of solidity to pure wind.”

Unfortunately, this nonsense works all to often.