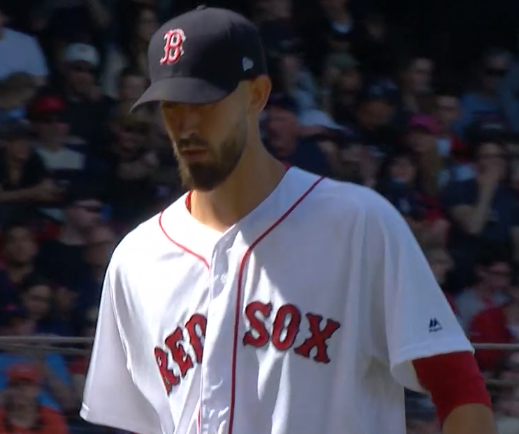 EXCLUSIVE: Is the ‘Rick Porcello Curse’ linked to a school teacher in Tampa

Over the weekend, Baltimore Orioles infielder Chris Davis broke his historic hitting slump after getting a first inning single off of Boston Red Sox pitcher Rick Porcello. While Orioles fans let out a sigh of relief, the Sox fans are still scratching their heads over the Porcello slump.

In October, Devan Fink wrote that the “Rick Porcello Curse has been broken,” alluding to the five years of postseason pitching, which NEVER contributed to a victory, but now the 2016 Cy Young Award winner’s performance has fallen off again in a shocking manner.

Porcello was even asked about possible effects from a line drive that hit him in the head during an exhibition game against the Chicago Cubs on March 25.

How bad has Porcello’s 2019 season been?

He is now 0-3 with a team-high 11.12 ERA to start the year. On Saturday, Porcello walked 12 batters in 11 1/3 innings and threw 48 of 90 his pitches for balls against the O’s. The righty said he is struggling to command all of his pitches– including his fastball, curveball and change-up. His tempo is off.

For decades the Boston fans felt as though they were under the famous Babe Ruth curse, “The Curse of the Bambino,” so is there a new curse?

While a librarian in Tampa, Florida may not be fond of that term, she tells the Global Dispatch that there are certainly issues at the heart of the Red Sox losses that were evident as far back as Spring Training…possibly after their World Series victory over the Los Angeles Dodgers.

Carlee Soto, an elementary school media specialist at an elementary school on the East side of Hillsborough County, explained to The Dispatch that she approached Porcello during Spring Training over the pitcher’s outlandish behavior: a World Series Celebration which was a naked cannonball into a tub of beer, followed with a several shouts of “[Expletive] yeah!” and his careless rabble rousing at the Boston Victory Parade, which involved calling for fans to throw full beer cans. That incident resulted with people getting hit with those beer cans, some fans being arrested, as well as “behaving like a 20-year-old frat boy” as Porcello poured a keg of beer over his head.

Yes, even the World Series trophy was damaged during the parade as beer cans were hurled at the players, according to a TMZ report.

Check out the antics at the bottom, via Twitter.

“I gently told him to ‘Please, keep your clothes on. Kids are watching and were researching you,” Soto says of her visit to jetBlue Park for Opening Day of Spring Training on 2/22/2019. “What am I supposed to tell kids about someone they look up to? I was just searching for a hero. If I did what he did I would be jailed and fired. He makes 400 times more than a highly effective teacher.”

The topic has graced headlines recently as a New York teacher fights for her job after a topless photo from three years earlier was leaked to her students. Her termination raised questions about the hypocrisy of how women and teachers are being treated and the disparity of their value to their worth.

Like his Red Sox teammates, Porcello plays a sport for millions of dollars, while Soto and teachers across the country teach children, encouraging them to create a better future and to speak truth to power without fear.

On their meeting and delivering her letter to Porcello, Carlee says “It was a briefing between professionals. At first, he made some excuses, but then realized his part in making my already tough job harder and apologized. I have no idea if he read the letter inside, but I gather not since he threw a water cooler.”

Sadly, Ms. Soto’s encounter took a shocking turn as the Northeastern exhibition game ended. Security surrounded Soto’s car and accused her of trespassing earlier when she approached Porcello. Authorities took pictures of her car, license plate, and driver’s license without any proof of a violation.

“They treated me like a criminal,” the teacher explained, describing the Red Sox’s security in response to her interaction with the player, even detaining her after the game, demanding to see her credentials.

“I was confused and terrified. Definitely not able to recognize America that day,” she said, likening the incident to authoritarian tactics used by oppressive regimes. “I am a 12 year; American elementary school librarian that advises in the 8th largest school district in the nation. Nothing inappropriate was involved in accessing the player. The exchange was polite. All rules were followed. All places were public accessible. It was my first time there.”

With some irony, she was featured in the Fort Myers newspapers’ coverage of the game, looking on with a pair of binoculars.

“What occurred right before that beautiful photo was awesome, but what happened after it was taken, was scary,” Soto recalled, noting that attendees and park workers complimented her fashion.

While Jay Fandel, Head of jetBlue Park security, stated there wasn’t a report against her and that security’s response was a misunderstanding on their part, the next day, Soto witnessed staff passing along her photo to the armed police guards.

“All I did was give ballplayer a professional letter explaining that we were researching him [with my students] and because he went wild, we couldn’t do that anymore. I gave him some children’s books and suggested that he read to kids to remember whom this is really all for. Now men with guns were surveilling me, for no evidenced reason, and ushers, who were cordial the first days were now giving vulgar gestures, I had to leave the park. I felt unsafe. I called and emailed the Red Sox head offices after consulting parents at Conference Night.”

VP of Ball Park Operations, Peter Nesbit of the Red Sox, admitted his Ft. Myers team’s fault in the situation, contacting Ms. Soto via email to say that they went overboard with how she was treated. He apologized and promised to refund the tickets.

She noted that there is still no apology for her kids…those fans.

“I hope to be a Red Sox supporter this year. I graduated Emerson College in Boston,” Soto said, before reflecting that “If a hero is falling, reach out. Don’t be afraid of doing a check-in. If they’re true they’ll shake your hand in genuine thanks.

Soto has been a highly effective National Board certified teacher for five years and says this set a “rocky tone” for the team and while Porcello wasn’t awful during Spring Training in his limited appearances, he has been “historically bad” since the official season started.

Maybe you believe in “Karma” or “Curses”… maybe you don’t. But the “baseball Gods” seem to have the Red Sox under some sort of bind and Rick Porcello is certainly among those being held in contempt.

To the All-Star pitcher, Carlee says she and her students “forgive you because that is what true heroes do.”

See Ms. Soto at the Easter series in Tampa Bay! Follow her on social media @riverlibrarian She’ll be your hero. She’s already a hero to many students’ and adults in her local community!

Hey Red Sox, if you listen to her, she’ll change your life. Quality educators do that.