The headlines from Washington Post and Vox parroted a nonsensical study attempting to malign Fox News, hosts like Sean Hannity or Tucker Carlson, claiming their viewers contributed the spread of coronavirus due to the advice and coverage on these shows.

“Throughout the coronavirus pandemic, media critics have warned that the decision from leading Fox News hosts to downplay the outbreak could cost lives. A new study provides statistical evidence that, in the case of Sean Hannity, that’s exactly what happened,” begins Vox.

“Using both a poll of Fox News viewers over age 55 and publicly available data on television-watching patterns, they calculate that Fox viewers who watched Hannity rather than Carlson were less likely to adhere to social distancing rules, and that areas where more people watched Hannity relative to Carlson had higher local rates of infection and death,” Vox continues.

The reports note that “this is a working paper; it hasn’t been peer reviewed or accepted for publication at a journal.”

Let me call it GARBAGE.

After seven pages of demographics and biased analysis of Fox News’ coverage, the study reports that “1045 individuals reported
that they watched any show on Fox News at least once a week; this is the sample we use in our analysis, given our focus on Fox News viewers.”

Got that, 1,000 people watching Fox ONCE per week during a shutdown/lockdown pandemic were correlated against GPS tracking to illustrate Fox viewers DIDN’T social distance DUE to Hannity, Carlson and the others at Fox.

This is what leftists wanted to hear.

This is also what conservatives are told ALL OF THE TIME: Fox is bad, you are too dumb to know that and you are too stupid to discern information for yourself and behave like sheep following instructions and advice from TV show hosts.

From VOX: “Why the finding that Sean Hannity killed people is disturbingly plausible,” the heading says ahead of “It seems that people really do see media as a guide to some of their most intimate life choices. Given how much a certain segment of older, white, conservative Americans trust Fox, it seems very plausible that they took cues from their favorite anchors on how to handle the coronavirus outbreak.”

Yes, the media matters and Fox is evil because conservatives watch it.

This is followed by Massacusetts, Illinois, Pennsylvania, Michigan, California and Connecticut, before we get to Florida, the first Republican led state on the list to this point.

So, Fox News is to blame for the COVID deaths, 2/3 of which are in Democrat led states, all but two (Pennsylvania and Michigan) voted for President Trump in 2016.

The study uses the word “misinformation” 19 times, but needs to look in the mirror for a bogus political analysis, exploiting the pandemic to attack Fox.

The only element which is worst is the media’s bias to elevate this study and findings as remotely accurate or relevant.

One factor which appears to be ignored, particularly because it was unclear which zip codes and specific regions were surveyed, is that the conservative demographics are in more rural areas, requiring less social distancing to function during the outbreak. Inner city shutdowns and population density appears to be more aligned in the inner cities…also a great contributor to the horrific death tolls in those aforementioned states.

So science is political, the media appears to be compliant with pushing a leftist agenda and the people suffer.

If no valid data and analysis can be provided by the experts, then people will indeed listen to any voice they feel is being HONEST with them.

Sadly, this is another strike against the integrity of Vox, Washington Post, the study’s authors.

We cannot properly advise citizens if data is spun to shield Democratic leaders in these hardest hit states.

COVID doesn’t care about the letters after your name or how you voted in 2016.

Be safe and smart. 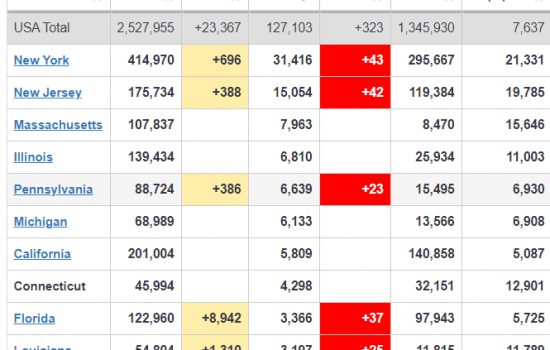