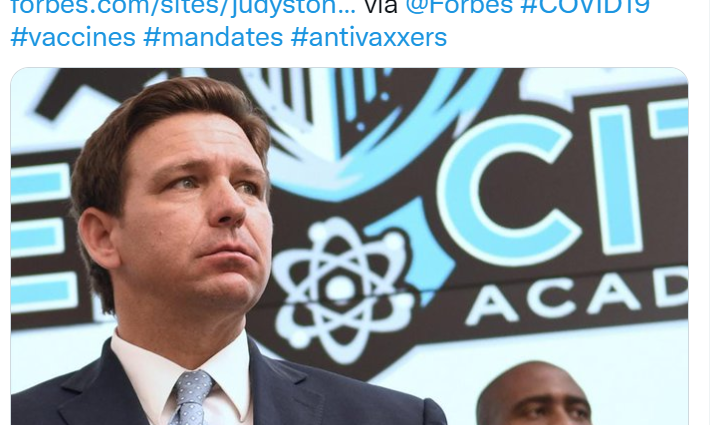 Florida: Dr. Ladapo is a controversial choice for Surgeon General, One reason is he’s a Cardiovascular Specialist, says author

The nomination of Dr. Joseph A. Ladapo, MD, PhD as Florida Surgeon General by Governor Ron DeSantis has caused an uproar with doctors in the Twitter blue check and non-blue check universe and one is because of his medical specialty. 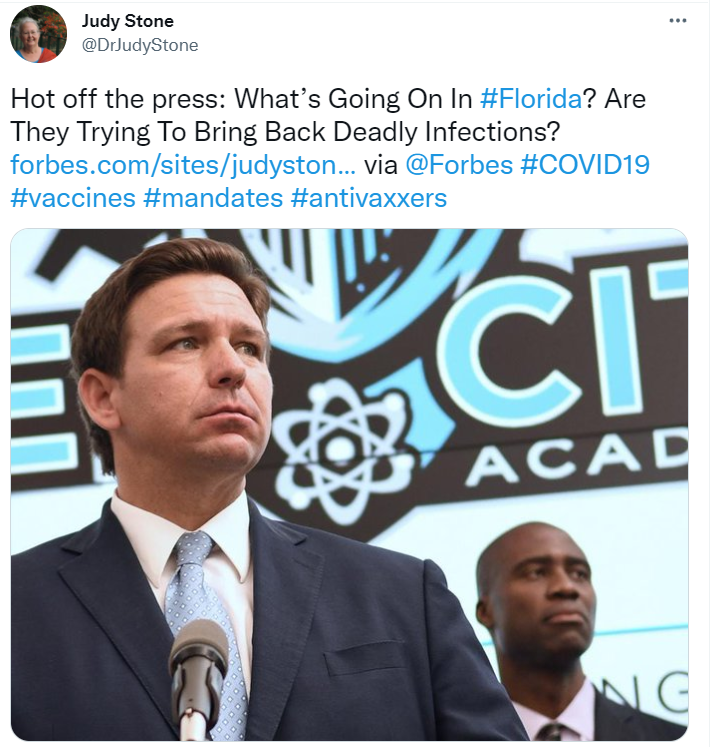 Just a little background on Dr. Ladapo’s medical credentials: Dr. Ladapo graduated from Wake Forest University and received his MD from Harvard Medical School and his PhD in Health Policy from Harvard Graduate School of Arts and Sciences. He completed his clinical training in internal medicine at the Beth Israel Deaconess Medical Center.

As far as I know, Health Policy is and should be an integral part of Public Health.

Public health is defined as the science of protecting the safety and improving the health of communities through education, policy making and research for disease and injury prevention- University of Pittsburg School of Public Health.

Prior to accepting the appointment in Florida, Ladapo was with the David Geffen School of Medicine at UCLA.

Pretty decent educational and training creds? You would think so; however, in a recent article in Forbes, author Dr. Judy Stone thinks not. Dr. Stone starts out her article:

This week’s news from Florida has been more disturbing than usual. First, Gov. Ron DeSantis announced he was appointing Dr. Joseph Ladapo as new surgeon general and secretary of the state’s health department.

Ladapo is a controversial choice for that role, being a cardiovascular specialist without training in epidemiology, virology, nor infectious diseases.

Hmmm, let’s take a look at others in similar roles.

There are five states that have a Surgeon General/Physician General–Florida, California, Arkansas, Michigan and Pennsylvania.

In California, the Surgeon General is Dr. Nadine Burke Harris. Dr. Harris is a pediatrician who studied at Stanford Medical School and got an Master of Public Health (MPH) from Harvard.

The Arkansas Surgeon General is Dr. Greg Bledsoe. Dr. Bledsoe is an Emergency Medicine physician who got his MD from the University of Arkansas and an MPH from the Johns Hopkins Bloomberg School of Public Health.

In Michigan, the Surgeon General is Kimberlydawn Wisdom, MD, MS. Dr. Wisdom is a board-certified Emergency Medicine Physician. Her focus is in Community health and wellness.

Lastly, the Physician General of Pennsylvania is Dr. Denise A. Johnson, M.D. Dr. Johnson is board certified in Obstetrics and Gynecology and received her Medical Degree at Georgetown University School of Medicine and completed her residency at Vanderbilt University Medical Center.

All fully qualified to fill the position of Surgeon General and none have a specialty in infectious diseases or virology. Several have MPH degrees; however, none indicate that masters was focused on epidemiology.

Wait, we can go on. How about the US Surgeon General, Dr. Vivek Murthy?

Dr. Murthy also served on President Joe Biden’s transition Covid-19 Advisory Board. If I were to look at a number of members of the board, they also fall into a similar category, eg. Dr. Ezekiel Emanuel , who is an oncologist.

The point is, calling out Dr. Ladapo’s credentials as “controversial” is foolish at best. It’s important that Public Health officials be well-rounded as public health is also multi-disciplinary. We’ve seen what happens with Public Health presents with a very narrow vision.

We can discuss other aspects of Dr. Ladapo that could be debated –the use of ivermectin and/or hydroxychloroquine for example–notice I said debated since debate and discussion seems outlawed in today’s day and age.

But to call out his credentials is just wrong.