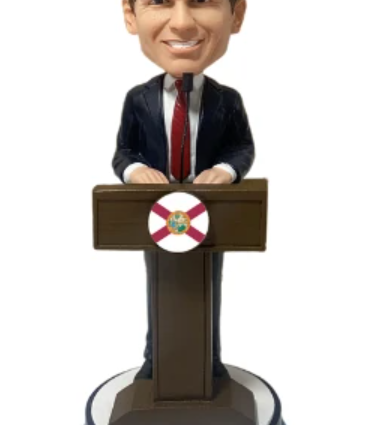 This morning, the National Bobblehead Hall of Fame and Museum unveiled a bobblehead of Florida Governor Ron DeSantis. The bobblehead features the Sunshine State’s 46th governor, a Republican who assumed office on January 8th, 2019. A former U.S. Representative for Florida’s Sixth District, DeSantis is a decorated U.S. Navy veteran who received the Bronze Star Medal for meritorious service and the Iraq Campaign Medal. 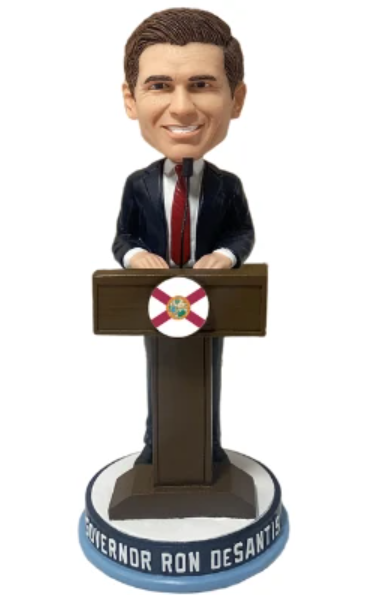 The bobbleheads are only available through the National Bobblehead Hall of Fame and Museum’s Online Store. They are $25 each plus a flat-rate shipping charge of $8 per order and are expected to ship in February. On a base bearing his name, the bobblehead features a smiling DeSantis, wearing a blue suit and red tie, standing at a podium as he makes an announcement into a microphone during a press briefing. A round version of the Florida flag is on the front of the podium.

Born in Jacksonville, Florida, the 43-year-old DeSantis graduated from Dunedin High School. He went on to attend Yale University where he was the captain of the baseball team and the leading hitter as a senior. After graduating with a degree in history, he spent a year as a teacher before attending Harvard Law School where he graduated with honors in 2005. While at Harvard, DeSantis earned a commission in the U.S. Navy as a JAG officer. During his active-duty service, he supported operations at the terrorist detention center at Guantanamo Bay and deployed to Iraq as the legal advisor to a U.S. Navy SEAL Commander in support of the SEAL mission in Fallujah. DeSantis was later awarded the Bronze Star Medal, the Navy and Marine Corps Commendation Medal, the Global War on Terrorism Service Medal, and the Iraq Campaign Medal.

After active-duty service, DeSantis served as a federal prosecutor where he targeted and convicted child predators. He was first elected to Congress in 2012 where he fought for term limits, the No Budget/No Pay Act, and to cut taxes. While serving in Congress, DeSantis refused his Congressional pension and health insurance plan because he is against special deals for politicians. In January of 2018, DeSantis announced his candidacy for Governor of Florida to succeed term-limited Republican incumbent Rick Scott. After winning the Republican primary, the close results of the general election between DeSantis and the Democratic nominee, Tallahassee Mayor Andrew Gillum, triggered a machine recount. DeSantis was declared the winner on November 20th, 2018.

A potential 2024 presidential candidate, DeSantis, who received the support of President Donald Trump during his run for governor, has brushed aside any talk of running for president. The Florida Governor’s approval rating remains high even when he was thrust into the national spotlight for his public feuds with President Joe Biden over pandemic-related protocols. DeSantis has announced his plans to run for reelection in 2022 and has a comfortable lead in early polls. Married to Casey, an Emmy Award-winning television host, the couple has three children.

The National Bobblehead Hall of Fame and Museum will continue to donate $5 from every governor bobblehead sold to the Protect the Heroes fund. Since early April 2020, the sales of bobbleheads featuring Dr. Anthony Fauci, Dr. Deborah Birx, other Governors, Dr. Amy Acton, Mayor Lori Lightfoot, and 35 different Essential Hero professions have raised over $300,000 for the Protect the Heroes fund to support the nation’s healthcare workers.