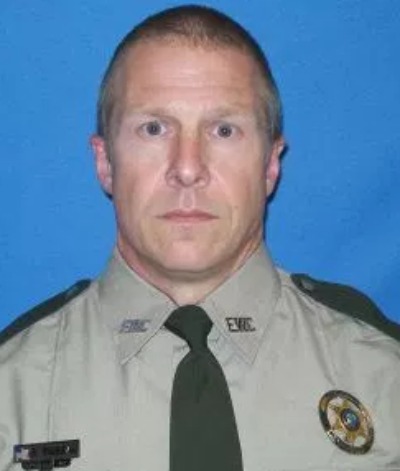 A bicyclist was killed Wednesday morning along the Courtney Campbell Causeway after he rode over a downed live power line on a bike trail. The Tampa Police identified the man as Gregory Patterson.

Patterson, 47, an active officer with the Florida Fish and Wildlife Conservation Commission, died after the 6:40 a.m. accident on the bike trail adjacent to the roadway in the Rocky Point area of the causeway, near Ben T. Davis Beach.

Hillsborough County Fire Rescue and Tampa Electric utility crews responded to the scene, but emergency personnel could not approach the man until the power was turned off.

Patterson died at the scene.

Our entire FWC family is in mourning for Greg,” said the Colonel Curtis Brown of the FWC in a statement to the media. “We will never forget his service and sacrifice, and can never repay that debt to his family. He was a true public servant at heart, and we will miss him deeply.”

TECO officials presumed that the power line may have been knocked down during Tuesday evening’s storms and the incident briefly backed up traffic along the roadway.

A Medical Examiner will make the final determination as an official autopsy has been scheduled, but police reported that everything points to electrocution.

Patterson was recently involved in a lifesaving incident and the Tampa Police Department was nominating him for a department lifesaving award.

Officers say Patterson responded to a jet ski accident near the Gandy Bridge on Sunday, July 10th. Police say he dove into the water to rescue one of the victims.