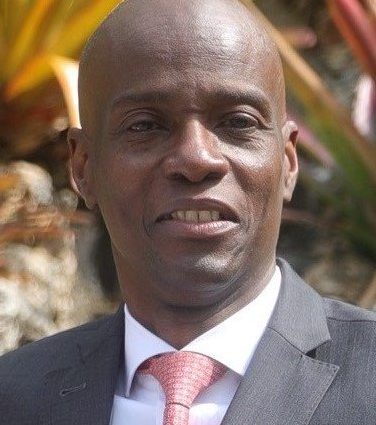 Haitian President Jovenel Moïse was assassinated at his home this morning by a commando formed by foreign elements, according to acting President Claude Joseph.

In addition, the President’s wife, First Lady Martine Moïse  was injured in the attack and hospitalized.

According to an official press release today:

“Around one (1) o’clock in the morning, on the night of Tuesday July 6 to Wednesday July 7, 2021, a group of unidentified individuals, some of whom spoke in Spanish, attacked the private residence of the President of the Republic and thus fatally injured The head of state. Wounded by gunshot, the First Lady takes the care that her case requires.

Condemning this odious, inhuman and barbaric act, the Prime Minister ai, Dr. Claude Joseph, and the CSPN call on the population for calm. The security situation in the country is under the control of the Haitian National Police and the Haitian Armed Forces.

All measures are taken to guarantee the continuity of the State and protect the Nation.

Embassy of Haiti in Canada tweeted:

“It is with great sadness that we confirm the assassination of President Jovenel Moise, during an attack on his residence by mercenaries. The First Lady, injured, receives the necessary care. Our hearts go out to the presidential family and to the whole nation”. 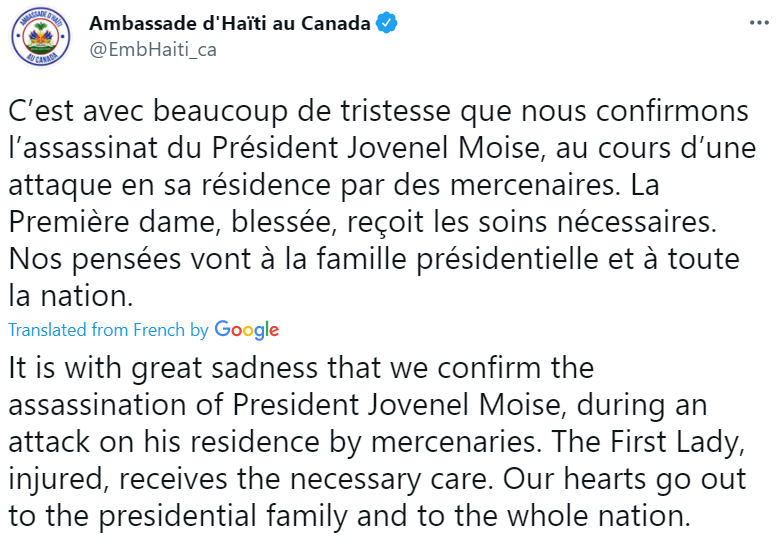 US President Joe Biden said in a statement:

We are shocked and saddened to hear of the horrific assassination of President Jovenel Moïse and the attack on First Lady Martine Moïse of Haiti.  We condemn this heinous act, and I am sending my sincere wishes for First Lady Moïse’s recovery. The United States offers condolences to the people of Haiti, and we stand ready to assist as we continue to work for a safe and secure Haiti.

In an address to the Nation broadcast on the National Television of Haiti (TNH) this morning, Prime Minister ai Claude Joseph declared a state of siege in Haiti.

The state of siege is a legal device implemented by a Government in the event of imminent danger (armed insurrection or foreign invasion) for the Nation.

It generally includes several provisions: the army replaces the police for public security; certain freedoms of the rule of law (movement, demonstration, expression) are severely restricted; the media are controlled; a curfew comes into force in the territory affected by the state of siege; national mobilization can be decided; civilian courts are replaced by military courts; increased surveillance of the population.