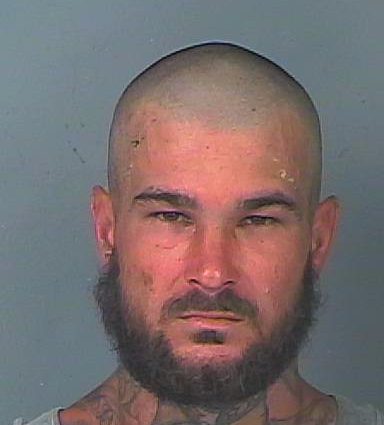 Hernando police arrest David Howell, pulled a machete out of pants, waved it around at protest

Hernando County Sheriff’s Office have arrested a man, David Allen Howell, for attempting to “incite an altercation” by pulling a machete out of his pants.

Howell, 34, of Zolfo Springs, was part of the George Floyd march Friday evening, stopping at both the Hernando County Courthouse and Hernando Park.

Deputies reported the attendees were passionate and kept their demonstrations peaceful. As the group pf 200 began to disperse, Howell started an altercation and ultimately pulled the machete from his pants and ran off waving it as deputies approached.

After multiple calls to drop the machete, which deputies say were ignored, Howell was tased and arrested.

No one was hurt during the incident.

Howell was charged with improper exhibition of a dangerous weapon and resisting arrest without violence.

Sheriff Al Nienhuis is pleased to report that the events held in downtown Brooksville and at the Hernando County Courthouse this afternoon and evening were peaceful, as promised by event organizers.

Members of the Sheriff’s Command Staff met with event organizers in the days prior to the event to discuss the event, the safety of everyone involved in the event and anyone who may be in the area, and the HCSO’s expectation that the event would be conducted peacefully and legally.

Individuals began arriving at the Hernando County Courthouse and Hernando Park in the City of Brooksville just after 3 p.m. At 5 p.m., when the organized event at the Courthouse officially started, there were between 200 and 250 people in attendance.

During the event, several individuals became passionate about their feelings; however, cooler heads prevailed. There were no incidents of physical violence or attempts to damage property.

As the crowd began to disperse, one individual in attendance attempted to incite an altercation. Unbeknownst to the suspect, deputies witnessed the event and proceeded to attempt to make contact with him.

As deputies were still in the process of approaching the suspect, the suspect pulled a machete from his pants. The suspect fled from deputies while brandishing the machete. Deputies ordered the suspect to stop running and drop the machete, to which he failed to comply.

A deputy deployed his Taser in order to bring the situation under control. The suspect was taken into custody before anyone was injured.

The suspect is identified as: David Allen Howell DOB/02-05-1986, of Zolpho Springs, Florida.

2020-06-06
Previous Post: Unemployment falls as US adds 2.5 million jobs
Next Post: INDIA: Man arrested for killing pregnant elephant with firecrackers in her food