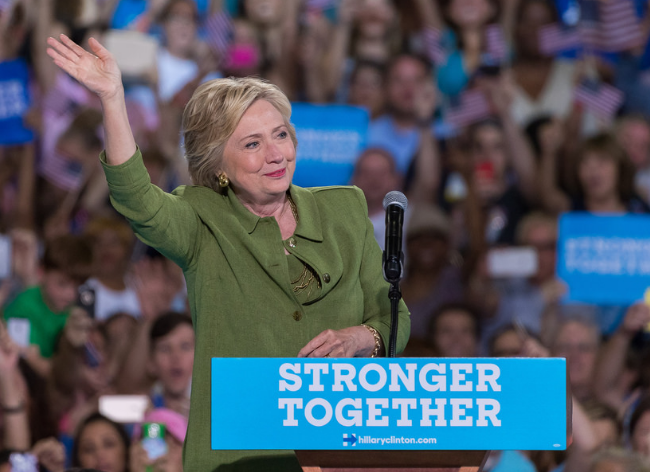 Now, starting on Monday in Philadelphia, we will offer a very different vision.  It’s about building bridges, not walls, between people.  It’s about making the economy work for everyone not just those at the top.  It’s about embracing our diversity that does make our country great.

I have to tell you, in Orlando today, in listening to people who had been there that night, meeting a mother whose son died, meeting others who barely escaped after hiding from the killer, sitting around a table with leaders of the LGBT community, leader of the SWAT team, a county commissioner, and a Muslim imam who has been embracing the LGBT community, I was so proud, I was so proud.  But – well, I’m proud of everybody in this country who gets up every day and makes a contribution and does your part.  And what the folks in Orlando said to me was so touching.  They said, ‘We have to stand against hatred no matter who it’s against’ – racial hatred, religious hatred, homophobia, xenophobia – all of these hates that infect the soul.  And we have to stand against violence everywhere, and that includes standing up for common sense gun safety measures.

Now, you can’t put this – you can’t really put this into law is what I’m about to say, but we need more love and kindness in this country. We need more respect between and among our fellow Americans.  We need to be listening more to each other.  The last thing we need are leaders who try to divide us even more than we are.  We should be working to reach out to those who are different from us.  Our differences, which make up our diversity, makes the United States the strongest, best positioned country in the world for the 21st century.

I am proud to be an American, and I want to be sure that our children and our grandchildren have the same pride and the same opportunity to have the access to the American dream that so many of us have had so that they too can enjoy the fruits of freedom and liberty, justice and equality and opportunity.

Now, look, I understand that there is a constituency for the fear and the anger that we saw last week.  I know there are people who are feeling insecure and anxious about their lives, about their futures.  They worry that maybe they’re not going to have as a high a standard of living as their parents or grandparents or as they themselves hoped.  I know that there’s a lot of angst about all the changes that are happening in the world – technology, globalization.  I understand all that.  And I respect those who have legitimate concerns and questions.