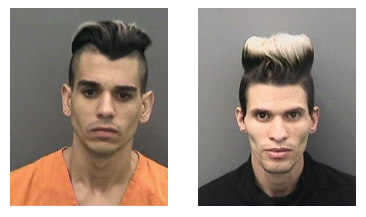 The Hillsborough County Sheriff’s Office announced the arrest yesterday of Emmanuel Camacho Contreras, 29, and Carlos Spindola-Abreau, 26, for several package thefts over the course of the previous weekend.

It was determined that the two were also fraudulently renting an apartment in the Brandon area. Detectives observed the suspects leaving the apartment and took them into custody without incidents. During the arrest, one of the suspects was in possession of several fraudulently printed checks. A search warrant was authored for the residence in an attempt to locate the property stolen during the package thefts and other evidence related to the identity thefts/fraudulent checks.

During the search warrant, detectives located several boxes with shipping labels and items inside. They are believed to be stolen presents/packages that were taken from various locations throughout Hillsborough County. Detectives also located two televisions that were stolen after being delivered to an address in Tampa. Furniture and electronics were located that were fraudulently rented from Rent King (the total amount of the items rents $10,000). Camacho Contreras and Spindola-Abreu were arrested for several counts of burglary of a curtilage and petit theft.

Spindola-Abreu also had several outstanding warrants for burglary and grand theft. Another subject was located inside of the apartment who also had an outstanding warrant. Detectives recovered a large quantity of items brand new in their box that ranged from clothing to electronics and are likely holiday gifts ordered and shipped via USPS/Amazon/etc. A computer, printing equipment, and check printing paper were also found.

This is an open and active investigation.