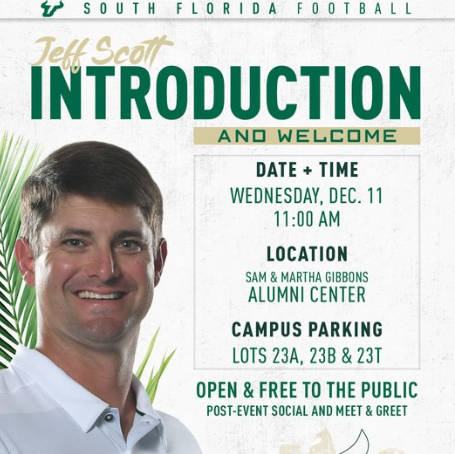 Jeff Scott to take over the helm at USF football

Scott was the co-offensive coordinator at Clemson since 2015, a key part of the rise of one of the most dominant football programs in the nation.

“Jeff is a very bright, enthusiastic and driven leader for our program and we are thrilled to welcome him to USF and back to Florida, where he was born and where he has recruited so well for Clemson for many years,” Kelly said. “He is a young and extremely gifted offensive mind, a developer of high-level talent and an elite national recruiter who brings the experience of having played an integral role from the beginning in helping to build one of the most successful programs in college football. We are thrilled that he and his wife, Sara, and their daughter, Savannah, are joining our Bulls family and will be part of the exciting future of USF football.”

Coach Scott, an Arcadia, FL native, will be introduced to the public Wednesday morning at 11 a.m on the USF Campus. The Bulls have made the event open for the public.