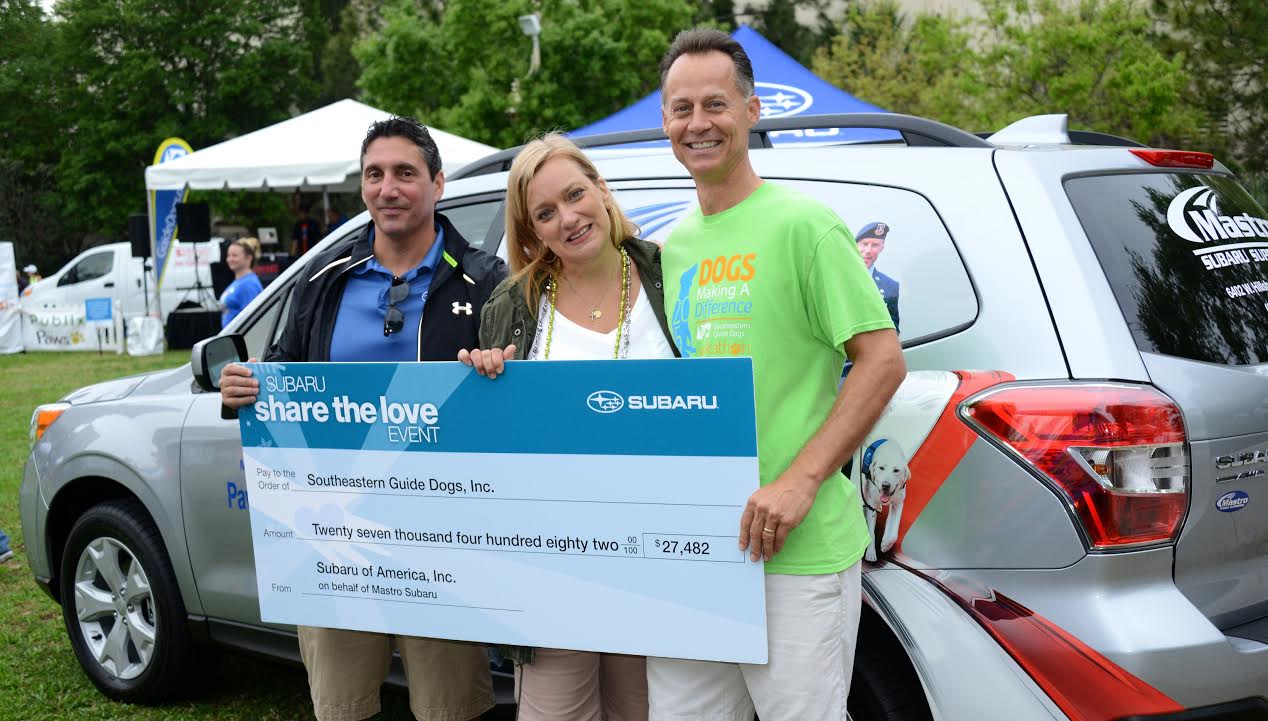 Mastro Subaru has been a longtime sponsor and supporter of Southeastern Guide Dogs and chose the organization as a recipient for its successful 2015  “Share the Love” charitable campaign. At the Tampa Walkathon on Saturday, April 2nd at Cotanchobee Fort Brooke Park, Stephanie Mastro presented a donation check for $27,481.69 to representatives of Southeastern Guide Dogs.

During the “Share the Love” program from the end of November through the beginning of January, Subaru of America donated $250 to Southeastern Guide Dogs for every car sold. The Mastro Family matched the amount raised, bringing the grand total to over $27,000. The Mastro Family has also sponsored a puppy named Mastro, and Subaru of America a puppy named Subie. The yellow Lab males are brothers and both are currently enrolled in harness training on the Southeastern Guide Dog campus.

“It is rewarding to know that our contributions and efforts go toward such a great cause,” said Stephen Mastro of Mastro Subaru. “We are excited to again select Southeastern Guide Dogs for our 2016 “Share the Love” campaign for both our Tampa and Orlando area dealerships.”

In accepting the check from The Mastro Family, Southeastern Guide Dogs CEO Titus Herman praised the local dealership for its generosity. “We are so grateful to The Mastro Family for not only making Southeastern Guide Dogs their charity of choice in the “Share the Love” program, but also for being a valued sponsor of our Walkathon,” Herman said. “Subie and Mastro have captured the hearts of many, and we are proud that they are now on their way to becoming superhero dogs that will transform lives. We thank our friends at Mastro Subaru and Subaru of America for being superhero partners and helping us fulfill our mission.”

2016-04-08
Previous Post: ‘Renoir – Revered and Reviled’ to air in theaters for one night event
Next Post: Launch of Manufacturing Alliance of Hillsborough County Heralds Growth, Awareness of Manufacturing Industry