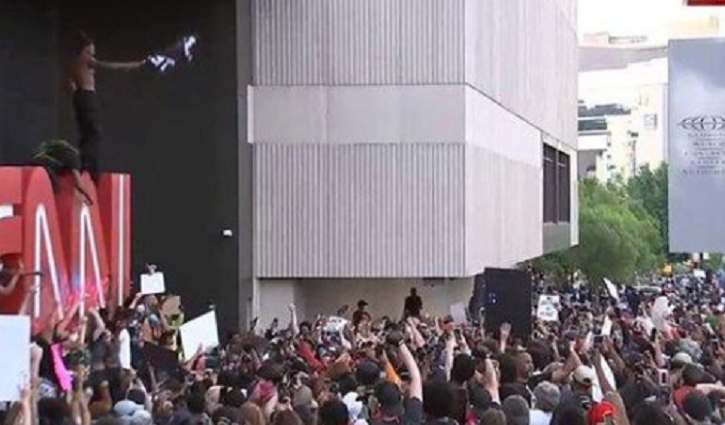 As the protests and rallies in the wake of the George Floyd murder erupted and transformed in some places into riots, ripe with violence and looters. As part of the rage filled mobs descend on communities, journalists report being beaten, chased and even shot at by those rioting.

In Seattle Monday night, MSNBC reporter Jo Ling Kent was reporting from the Capitol Hill neighborhood. As police began advancing on protesters, she was hit in the arm by what was at first thought to be fireworks, but during the 3 p.m. ET hour on MSNBC Tuesday,

The two Australian journalists, on assignment for Australia’s Channel 7, were among the members of the news media covering the President Trump announced crackdown on protests which turned violent. A camera operator, Tim Myers, was hit by a police riot shield, knocking his camera to the ground.

Myers and the reporter was reportedly injured during the chaos, prompting an official investigation.

Of course, the biggest news, was the massive attack on CNN headquarters in Georgia, which resulted in the vandalizing CNN’s logo outside its offices, breaking the building’s glass and entering the center. Protesters were also heard chanting anti-media rhetoric.

Many journalist feel as though they can exist within these rallies, even when they turn violent, without recourse, but some reports still take aim at police.

Daily Mail led with “Cops have ‘attacked 120 reporters and arrested more than 33 during George Floyd protests: Bill de Blasio says journalists should ‘never be detained’ as news crews claim they are being shot at and roughed-up by police during the chaos.”

The video shows more than a half-dozen officers confronting the journalists as they filmed and took photographs of police ordering protesters to leave the area near Fulton and Broadway shortly after an 8pm curfew took effect.

An officer, using an expletive, orders them to go home. Bumsted is heard on video explaining the press are considered ‘essential workers’ and are allowed to be on the streets. An officer responds ‘I don’t give a s***.’ Another tells Bumsted ‘get the f*** out of here you piece of s***.’

So. the police are trying to clear an area and the journalists don’t respect the police instructions and then get angry, painting the officers as the villain?

Yes. That is happening.

Maybe not often, but enough to taint the message that the journalists are being “attacked” or targeted.

Tim Pool has covered this extensively, check that out below, pointing out the police will disband a crowd and instruct the press to respond in ways to keep peace and order.

NewsBusters managing editor Curtis Houck insisted it’s a “pure farce” to suggest that the “unjustifiable attacks” on both local and national journalists can be blamed on the president, slamming the media for hesitating to denounce groups like Antifa who have contributed to the violence.

“Seeing as how the protesters and rioters skew heavily to the left on the political spectrum, the arguments are null and void that have come from your typical liberal media apologists and janitors,” Houck told Fox News. “They’re desperate to continue fomenting rage against news outlets that go about their news-gathering and presentation differently. Instead, you’ll continue to see esoteric statements denouncing the attacks and lecturing about the importance of journalists now more than ever.”