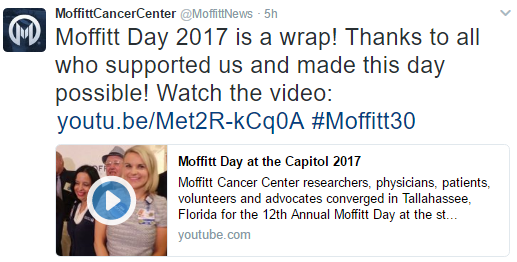 Moffitt Cancer Center Executive Vice President and Center Director Thomas A. Sellers, Ph.D., MPH, was joined by State Rep. James Grant and State Sen. Dana Young today to announce a new bill asking lawmakers for an $8 million increase in the annual funding that the cancer center receives from Florida’s cigarette tax. The additional funding would be used to replace a nearly 30 year old research building with a new, state-of-the-art facility on Moffitt’s Magnolia Campus at the University of South Florida in Tampa.

“Moffitt was established by the state to provide Floridians with access to world-class cancer care. In order to keep pace with the needs of our state’s aging population and continue to develop new discoveries and treatments for cancer, expanding and updating Moffitt’s facilities is critical,” said Sellers.

“Moffitt’s longstanding partnership with the State of Florida has been crucial to improving cancer care for our citizens and educating the next generation of healthcare professionals. Increasing the funds Moffitt receives from the cigarette tax will allow the cancer center to continue making a lasting impact in Florida and beyond,” said Rep. Grant.

“Moffitt is a tremendous asset to the State of Florida. An increase in funding to this world-class facility will provide an amazing return on investment as its physicians and researchers continue to pursue innovative breakthroughs in the fight to cure cancer,” said Sen. Young.

The new research building is part of a larger 10-year expansion plan that was announced by Moffitt late last year. The plan calls for several new buildings, hospital renovations and the creation of more than 750 new jobs.

Today’s announcement was part of the 12th annual Moffitt Day, which brings more than 50 volunteers, including patients, caregivers, physicians and researchers to the State Capitol in support of Moffitt. Advocates meet with lawmakers, sharing Moffitt’s mission to eradicate cancer and asking for continued state support for Florida’s premier cancer center. This year, Moffitt was joined by Cindy Gruden, wife of ESPN analyst Jon Gruden. Both are longtime champions of the cancer center. Cindy is a member of Moffitt’s Foundation Board of Directors.

“Moffitt is all about teamwork. Their team comes together day after day to give their patients the best game plan to battle cancer. Jon and I are proud to support this organization and spread the word about the amazing advances they are making in the prevention and cure of this disease,” said Gruden.