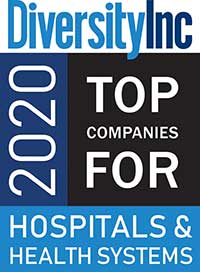 For the fifth consecutive year, Moffitt Cancer Center has been recognized on DiversityInc’s Top Hospitals & Health Systems List. The organization released its rankings on May 5 and placed Moffitt at No. 5.

Moffitt is the only cancer center — and the only health care organization in Florida — to make the list. Northwell Health in New York, the Henry Ford Health System in Detroit, Cleveland Clinic and Wellstar Health System in Atlanta placed first through fourth, respectively.

“Inclusion is a Moffitt value that the institution takes seriously,” said B. Lee Green, Ph.D., vice president of Diversity, Public Relations and Strategic Communications at Moffitt. “The DiversityInc honor is one we hold in high regard and we continue to believe that diversity and inclusion are crucial to achieving our mission as a nationally recognized cancer center. We use this ranking each year to monitor how well we are doing from a national perspective.”

DiversityInc’s annual survey — tracking the nation’s top companies when it comes to hiring, retaining, and promoting women, minorities, people with disabilities, LGBT and veterans — is the most rigorous, data-driven survey of its kind, gauging detailed demographics based on race/ethnicity and gender at some of the largest U.S. employers

“Leaders of DiversityInc Top 50 Companies understand that nurturing an inclusive environment where everyone has a sense of belonging drives profitability and results in a competitive advantage, especially during a recession,” CEO of DiversityInc Carolynn Johnson said.

Moffitt is set apart by the work in the areas of diversity and inclusion education and training, cultural and linguistic competency, language services programs, community outreach and education efforts, and supplier diversity.  Over the past year, Moffitt delivered more than 2,350 hours of diversity and inclusion training to team members, and its in-house language services team has completed more than 6,700 patient encounters.

Additionally, more than 490 underserved women were provided access to mammography screening vouchers and Moffitt has spent of more than $30 million with certified diverse business owners.

The recognition from DiversityInc is among several notable awards for Moffitt. The cancer center has consistently been designated a Leader in LGBTQ Healthcare Equality by the Human Rights Campaign and named one of the Top 10 Nonprofit Companies for Executive Women. Moffitt was also recognized by the American Hospital Association as an Equity of Care Honoree.  Moffitt received the National Organization on Disability Leading Disability Employer Seal. Moffitt is a Top 10 Best Hospital for Cancer based on U.S. News & World Report.