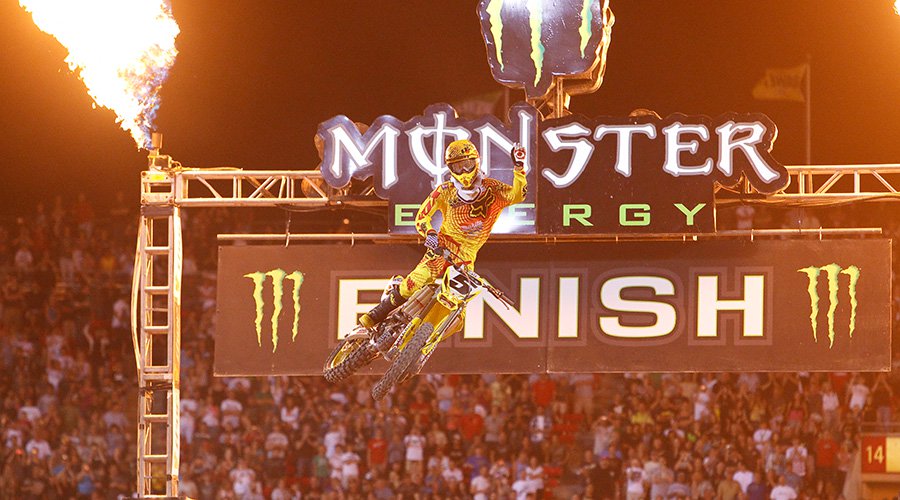 The 17-round schedule for the 2020 season of Monster Energy AMA Supercross, an FIM World Championship was announced earlier this year. Today to mark the tickets on-sale dates, Feld Entertainment, Inc. has revealed which cities will feature the Triple Crown, 250SX Class Regional Championships and the East/West Showdown formats. The Eastern Regional will launch in Tampa Bay at Raymond James Stadium on Saturday, February 15.

In its third year, the 3-Main Event Triple Crown format races will take place at State Farm Stadium in Glendale, AZ on January 25, AT&T Stadium in Arlington, TX on February 22 and at Sam Boyd Stadium in Las Vegas, NV on April 25.

The Eastern Regional 250SX Class Championship will be contested at the following rounds – Tampa, FL on February 15, Arlington, TX on February 22; Atlanta, GA on February 29, Daytona Beach, FL on March 7; Indianapolis, IN on March 14; Detroit, MI on March 21 and Foxborough, MA on April 18.

The East/West Showdown races will be held at Empower Field at Mile High in Denver, CO on April 4 and Rice-Eccles Stadium in Salt Lake City, UT on May 2.

East/West Showdown races became synonymous with the Las Vegas finale and were the only time in the season where both the Eastern Regional 250SX Class and Western Regional 250SX Class athletes raced together in what was originally combined non-points paying events. This changed in 2016 when the series changed the format to points-paying races as the only Main Event in the 250SX Class. 2020 will mark the first time in the sport’s history that the East/West Showdown races will take place in two new cities, in-an-effort to expose the younger 250SX Class athletes to new audiences.

Connect via our social channels below:

The Toyota BMX Triple Challenge will take place during FanFest at Angel Stadium of Anaheim on January 18, Empower Field at Mile High in Denver on April 4 and Rice-Eccles Stadium in Salt Lake City on May 2.

For the first time in 20 years, the Supercross World Championship Finale will be moving from Las Vegas to Salt Lake City.  Salt Lake will host the largest-ever FanFest footprint at Rice-Eccles Stadium and will become the epicenter of an outdoor-themed, festival-like atmosphere befitting for a World Championship Finale and a World Class, Utah-styled “State of Sport” caliber event.  Street closures are planned for around the stadium to accommodate the larger crowds. Beer gardens, lounging areas and experiential activities will be sprinkled throughout FanFest to accommodate fans and interests of all ages. Make sure to check SupercrossLIVE.com throughout the season as plans are still being developed for this first-ever Supercross FanFest World Championship Finale in Salt Lake City.

Continuing to establish itself as the world’s premier developmental platform for amateur riders, Supercross Futures, an AMA Amateur National Championship, will take place in ten select markets in 2020 season including Tampa, FL on February 16, 2020.  The series provides even greater access to the sport’s largest stage giving up-and-coming talent a chance to compete in the same stadium and on the same dirt as the elite athletes of Monster Energy Supercross while honing their skills in advance of their professional careers.  The ground-breaking SX Futures concept will foster approximately 6,100 athletes across 26 classes on their “Road To Supercross” – beginning with 4-year-olds in the 51 Limited class, through the elite 250SX Futures class, providing athletes the opportunity to earn their 250SX Class Supercross license, leading up to the 2020 SX Futures National Championship in October following the Monster Energy Cup.   Athlete registration opens on October 28 at supercrossfutures.com.

Ticket prices start as low as $15!

Tickets & FanFest Passes will be available for purchase online at Ticketmaster.com or in-person at the venue Box Office after January 6, 2020.

Feld Entertainment, Inc. is also pleased to announce the establishment of the official Monster Energy Supercross Travel Portal where hotel, car rental, flights and tickets can all be purchased in one place. Supercross fans can save time and simplify their travel planning and booking by using the new travel portal. For more information, please visit – SupercrossLIVE.com/travel.