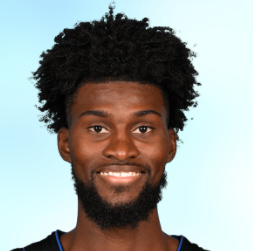 This evening, Jonathan Isaac, forward for the Orlando Magic, will sit down for a live interview with political commentator Dave Rubin at the second National Conservatism Conference, which is currently being held in Orlando, Florida.

Isaac’s remarks at a September 27 press conference went viral. “I thank God, I’m grateful that I live in a society where vaccines are possible and we can protect ourselves and have the means to protect ourselves in the first place,” he said, in part. “But with that being said, it is my belief that the vaccine status of every person should be their own choice and completely up to them without the bullying, without being pressured, or without being forced into doing so.”

“Jonathan Isaac has become an outspoken voice for individual choice as well as standing up for what you believe in,” said Yoram Hazony, Chairman of the Edmund Burke Foundation, which is hosting the conference in Orlando. “He is a welcome voice in this new movement.”

During the NBA’s opening weekend in 2020, Isaac was the only member of his team who neither knelt nor wore a Black Lives Matter t-shirt during the national anthem. He later cited gospel. “I don’t think that kneeling or putting on a t-shirt, for me personally, is the answer,” he said. “I feel like, for me, Black lives are supported through the Gospel. All lives are supported through the Gospel.” Isaac has been consistently outspoken about the role of faith in his life.

The National Conservatism Conference began this past Sunday and concludes this evening. It is featuring, among others:

Anna Wellisz, Vice President of the Edmund Burke Foundation, said, “We’re building a coalition of people and a coalition of ideas. It hasn’t come together anywhere else. But it’s happening at the National Conservatism Conference.”

GOVERNOR RON DESANTIS: ‘WE SHOULD BE DOING EVERYTHING WE CAN TO GET PATIENTS MONOCLONAL ANTIBODY TREATMENTS, NOT CUTTING ALLOCATIONS OF TREATMENT LIKE THE BIDEN ADMINISTRATION HAS DONE’