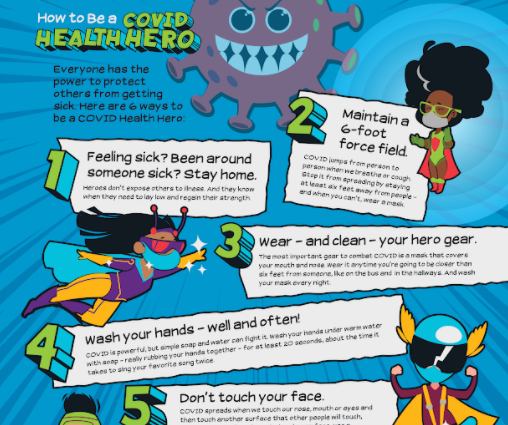 As students across Florida prepare to return to school later this month, simple behaviors could become heroic to significantly stop the spread of the disease – things like wearing a mask, staying six feet apart and coughing into an elbow instead of a hand. That’s the point of a new creative campaign, “COVID Health HeroesTM” developed by Sachs Media Group for Leon County Schools (LCS,) which also will be offered to other school districts around the state. 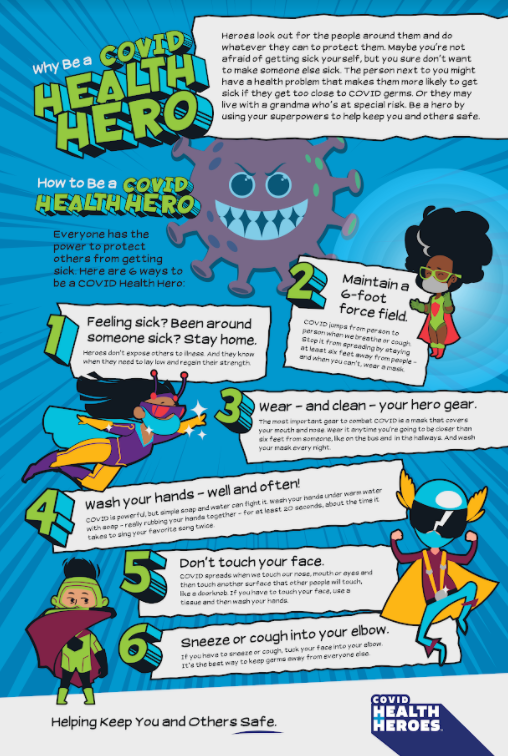 The campaign was the idea of Sachs Media Group President Michelle Ubben, who served on the task force advising the district about how to open schools as safely as possible. Ubben saw the need for an upbeat messaging campaign to help students understand not just how to keep others safe, but why.

“We wanted students to understand that they have great power to keep others safe, and that’s the definition of a superhero,” Ubben said. “Even if they aren’t concerned about getting sick themselves, we want them to understand that the person next to them may have underlying health risks or may live with someone who does.”

LCS Superintendent Rocky Hanna praised the donated campaign for providing a needed tool for the district as it stretches resources to keep schools hygienic and safe.

“We are concerned about the safety of everyone – our students, teachers, support staff, families and our community,” Hanna said. “These tools will help us reinforce behaviors to students that can make a big impact on keeping others safe.”

“I appreciate the interest and involvement of Sachs Media Group,” Montford said. “School districts can certainly use resources such as these to keep students, teachers, staff and their families safe during these challenging times.”