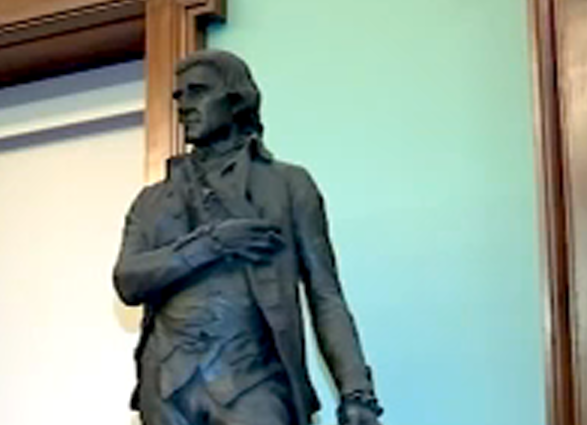 A Thomas Jefferson statue is being removed from New York’s City Council Chamber in response to Public Design Commission members who overlook the third president’s accomplishments and are outraged that he owned slaves.

The Jefferson statue resides near the near the chamber’s main dais, being placed there over 100 years ago, first placed in City Hall around 1834 and was displayed in several locations there before moving to the main chamber in 1915.

Jefferson’s statue should not be in “a position of honor and recognition and tribute” in the chamber, council member Inez Barron said during a public meeting on Monday about the statue’s future, adding that Jefferson “felt that Blacks were inferior to whites — in his own words.”

The statue was commissioned because of Jefferson’s support for religious freedom in the U.S. military; it was paid for by Navy officer Uriah Phillips Levy, a New Yorker who was one of the first Jewish officers in the service.

Barron also noted the atrocities and extortion of slavery, as well as Jefferson’s initiative to push Native Americans off their ancestral lands.

“We’re not being revisionist. We’re not waging a war on history,” Barron said. “We’re saying that we want to make sure that the total story is told, that there are no half-truths and that we are not perpetrating lies.”

The commission voted to approve removing the statue, pledging to decide by the end of 2021 to find “a location where it remains in the public realm.”

There statue is a plaster version of the bronze statue that stands in the Capitol Rotunda in Washington, D.C., which Levy also gifted to the U.S. government.

In the wake of the protests in Charlottesville, Virginia in August 2017, President Trump forecast that Jefferson statues would be targeted if Americans allowed Civil War statue to be removed.

“Not all of those people were white supremacists by any stretch. Those people were also there because they wanted to protest the taking down of a statue of Robert E. Lee,” Trump said at the time. “This week’s it’s Robert E. Lee. I noticed that Stonewell Jackson is coming down. I wonder, is George Washington next week and is it Thomas Jefferson the week after?”

“You really do have to ask yourself: Where does it stop?” Trump mused and was mocked.