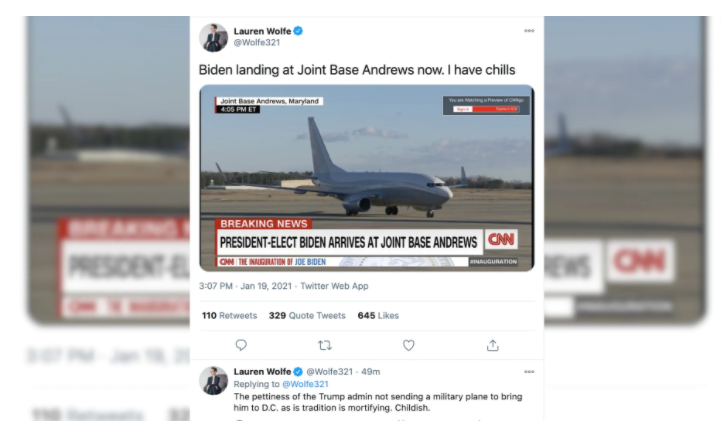 New York Times editor Lauren Wolfe was clear about her excitement over the President-elect Joe Biden at Joint Base Andrews ahead of today’s inauguration.

“Biden landing at Joint Base Andrews now,” she wrote on twitter. “I have chills.”

Wolfe then criticized the Trump administration for not providing a military plane to ferry Biden from Delaware.

“The pettiness of the Trump admin not sending a military plane to bring him to D.C. as is tradition is mortifying,” wrote Wolfe, who added, “Childish.”

Wolfe later deleted her tweet after she was fact-checked by critics who cited reports that the Biden team was offered a military plane but chose to fly private.

The Times editor was mocked by critics, many of them invoking former MSNBC host Chris Matthew’s infamous “thrill up the leg” remark about President Obama.

“It’s okay, The NY Times will get through this,” conservative commentator Stephen Miller hit back.