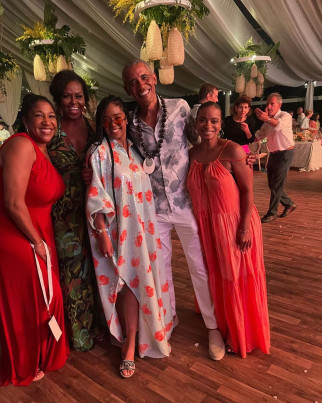 Former President Barack Obama celebrated his 60th birthday on Saturday night, a party sparking a heightened divide between political parties and the wealthy elites and regular American citizens. Maskless guests, clearly not social distanced was excused away during a CNN as a “sophisticated vaccinated crowd” and the media ignored the climate czar, John Kerry, flying in a private jet to the event.

TMZ documented the occasion, showing Obama dancing without a mask in a video posted on Instagram by singer and songwriter Erykah Badu, a post later deleted.

The Centers for Disease Control and Prevention recently recommended that people, including those fully vaccinated against COVID-19, resume wearing face coverings in public indoor spaces in areas with high rates of transmission to protect against the delta variant. The calls for vaccine passports and possibly vaccine mandates, continue to grow louder and louder.

“His birthday party is insane,” one of Obama’s caterers told The NY Post last week. “What is he thinking?”

The Daily Mail published aerial photos of the $12million Martha’s Vineyard estate, the expansive “outdoor” tents and setup for the event.

The NY Post writer explaimed: “No wonder the vaccine is still politicized. No wonder there remains two Americas, despite Obama’s constant, self-aggrandizing promises to unite us.”

An Obama supporter identified as Meka fired back, tweeting, “The audacity of the people who act like wearing a mask is oppression and screaming no to the Covid vaccines to try and come for President Obama.”

So it was no surprise to see the press covering the backlash, but the response and excuse was shocking.

A NYT reporter on CNN justifying Obama’s huge maskless birthday bash because he only invited “a sophisticated, vaccinated crowd” is about as emblematic of liberal discourse as it gets.

What happened to all the concerns about vaccinated people passing Delta to the unvaccinated? https://t.co/9g8qGkYQEO

“Yes, it’s a pandemic and a crisis, but let the sophisticated people have their fun!” Greenwald then tweeted.