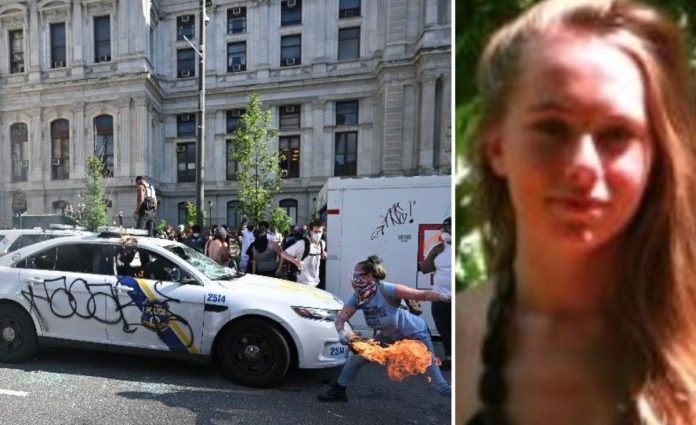 A rioter and arsonist in Philadelphia, Lore-Elisabeth Blumenthal was charged Wednesday following an investigation into setting fire to two police vehicles, throwing Molotov cocktails and other violent behavior.

Blumenthal, 33, now faces federal arson charges for the incident on May 30, a Philadelphia massage therapist identified through by zeroing in on a peace sign tattoo on her forearm, her social media history and online shopping patterns, specifically a custom T-shirt from Etsy.

Investigators tracked the shirt on the woman in the video to Instagram and LinkedIn and the fashion website Poshmark.

FBI and the Justice Department have reviewed news footage, online data and social media accounts to track down these provocateurs responsible for acts of violence or property destruction.

“Torching a police car has nothing to do with peaceful protest or any legitimate message,” U.S. Attorney William M. McSwain said. “It is a violent and despicable act that will be prosecuted in this District to the fullest extent of the law. Anybody who engaged in such acts can stand by to put your hands behind your back and head to federal prison. We are coming for you.”

More than 700 arrests were made by Philadelphia police during the height of the protests earlier this month.

“During the past several weeks, multitudes of people peacefully and lawfully exercised their First Amendment right to protest,” Outlaw said. “However, there were individuals who chose to use the protests as an opportunity to engage in criminal activity. Some of these individuals’ actions were malicious, destructive, and could have resulted in critical injuries to others.”

Blumenthal faces a maximum possible sentence of 10 years in prison and a fine of up to $250,000.

Prosecutors have filed a motion to detain Blumenthal pending trial.