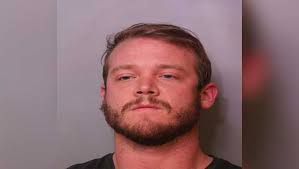 Polk County Sheriff’s deputies shot an arsonist his privates after a high speed chase ended near Dinosaur World with a fire fight.

Luke Neely, 30, is facing several charges after throwing molotov cocktails at a house, damaging the roof and then led police on a high speed chase.

When deputies tried to stop the vehicle, the pickup truck continued to flee on U.S. 98, the sheriff’s office said.

Neely was found with a loaded AR-15 and a fully loaded handgun.

He was disarmed and taken to the hospital, where he’s been treated for non-life-threatening wounds, but is not expected to be able to procreate.

“We’ve changed the looks of his groin forever — if you know what I mean,” Polk County Sheriff Grady Judd said at a press conference.

Neely has been charged with 3 counts of attempted first-degree murder, arson, 7 counts of firebombing and one count of resisting arrest with more charges from Hillsborough County are pending.

The Florida Department of Law Enforcement is investigating the shooting.

The arson investigation is ongoing, according to the sheriff’s office.