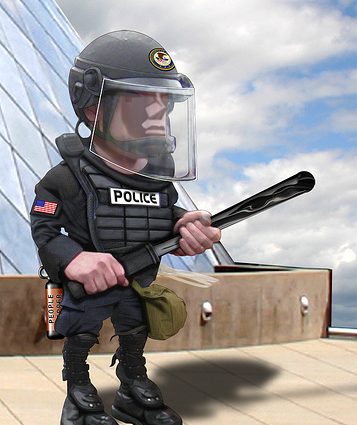 As Yahoo reports as the “crowd-control team,” the Portland riot police force have resigned after the recent indictment of Officer Corey Budworth for allegedly assaulting a photographer during an overnight riot last summer.

A police lieutenant informed Chief Chuck Lovell that the riot control officers resigned over the lack of support from city leaders and from the district attorney.

The officers and sergeants will remain on the police force, but are quitting the volunteer rapid-response team.

The mass resignation comes as Budworth faces charges for hitting Teri Jacobs, watch the video clip below, around the 75th straight night of riots, when the mob moved on Multnomah Building in southeast Portland.

Budworth “was forcefully knocked to the ground” and officers deployed pepper spray and less lethal munitions as the crowd grew more aggressive. Batons were used to separate aggressive rioters.

Jacobs, an activist and photographer, fell to the ground.

Cell phone video showing Budworth striking Jacobs in head quickly circulated on social media. The union said the blow to the head was an accident on the officer’s part and he used the lowest level of baton force.

“Unfortunately, this decorated public servant has been caught in the crossfire of agenda-driven city leaders and a politicized criminal justice system,” the Portland Police Association said Tuesday after a Multnomah County grand jury charged Budworth with one count of fourth-degree assault related to the Aug. 18, 2020, incident.

Yahoo and other outlets are not using the term “riot,” in describing this police division, calling them crowd-control teams. The branch uses the term “rapid response” team.

Their full statement is below.

ABC News reported a source claimed that the officers decided the assault charge against Budworth reflected too much hostility towards their police work, and they did not see a way forward in being members of the team facing the continuous violent protests in downtown Portland.

“All that being said, as your police bureau, we are committed to providing the community the best service that we can,” Davis said. “This does not mean there will be no response in public order situations. We’ll use the resources that we have.”

On June 16, 2021, Portland Police Bureau employees serving as members of the Rapid Response Team (RRT) left their voluntary positions and no longer comprise a team. Its members were sworn employees of the Portland Police who served on RRT in addition to their daily assignment in the Bureau. Despite no longer serving on RRT, they will continue in their regular assignments. There were approximately 50 employees serving as RRT members.

The Rapid Response Team is an all-hazard incident response team that has received advanced specialized training to respond to incidents requiring higher levels of technical expertise including public order policing, natural or man-made disasters. The primary role has been to provide public safety at crowd events when there was a threat of harm to the community. All Rapid Response Team members are trained in advanced skills related to crowd management and crowd control including crowd psychology and behavior, team formations and movements, the use of enhanced personal protective equipment, use of force, de-escalation and arrests.
###PPB###