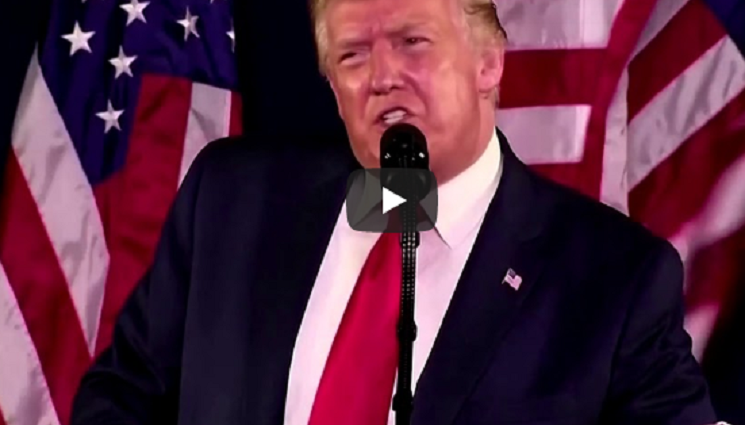 President Trump spoke at Mount Rushmore on Friday to give an Independence Day speech ahead of the Fourth of July weekend, attacking the “left-wing cultural revolution” set to “overthrow the American Revolution.”

“There is a new far-left fascism that demands absolute allegiance. If you do not speak its language, perform its rituals, recite its mantras, and follow its commandments, then you will be censored, banished, blacklisted, persecuted, and punished,” said Trump.

“Our children are taught in school to hate their own country.”

Trump continued: “Make no mistake, this left-wing cultural revolution is designed to overthrow the American Revolution,” claiming that radicals were “determined to tear down every statue, symbol, and memory of our national heritage” to get the job done.

“Angry mobs are trying to tear down statues of our founders, deface our most sacred memorials, and unleash a wave of violent crime in our cities,” Trump said.

Check out a short clip below via Reuters.

Critics were unhappy with Trump’s sharp attack. The New York Times headline, titled “Trump Uses Mount Rushmore Speech to Deliver Divisive Culture War Message” begins “Down in the polls and failing to control a raging pandemic, the president cast himself as waging battle against a ‘new far-left fascism’ that imperils American values and seeks to erase history.”

…appealing unabashedly to his base with ominous language and imagery, he railed against what he described as a dangerous “cancel culture” intent on toppling monuments and framed himself as a strong leader who would protect the Second Amendment, law enforcement and the country’s heritage.

The scene at Mount Rushmore was the latest sign of how Mr. Trump appears, by design or default, increasingly disconnected from the intense concern among Americans about the health crisis gripping the country. More than just a partisan rally, it underscored the extent to which Mr. Trump is appealing to a subset of Americans to carry him to a second term by changing the subject and appealing to fear and division.

On Friday evening, the Trump administration said it would establish a task force dedicated to creating a National Garden that would contain statues of great American “who made substantive contributions to America’s public life or otherwise had a substantive effect on America’s history.”