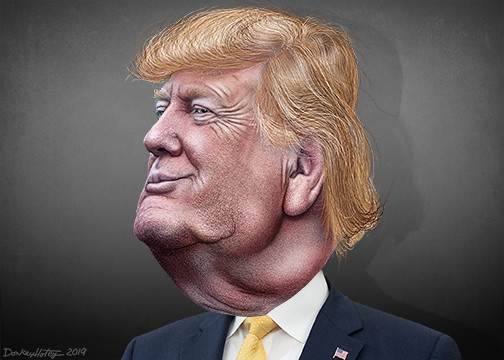 “We all saw what happened last week. We can’t let that happen. Hopefully George is looking down and saying this is a great thing that’s happening for our country. (It’s) a great day for him. It’s a great day for everybody,” Trump said during a White House Rose Garden event.

“This is a great, great day in terms of equality,” Trump added.

He continued: “…equal justice under the law must mean that every American receives equal treatment in every encounter with law enforcement regardless of race, color, gender or creed. They have to receive fair treatment from law enforcement.”

Check out the video clip below via The Sun.

Floyd’s murder in police custody has sparked widespread, massive and many peaceful protests across the country.

Many media outlets and Trump critics attempted to imply the President was stating Floyd to looking down to be happy about the jobs report and the White House pushed back.

“In the course of Rose Garden remarks about strong economic news, the President also spoke of the national conversation that is taking place following Mr. Floyd’s killing, and of Americans coming together on the belief that everyone should be treated equally under the law,” said Courtney Parella, a deputy press secretary. “Media claims that the President said that Mr. Floyd would be praising the economic news are wrong, purposefully misrepresented, and maliciously crafted.”

Michael Steele, a former chairman of the Republican National Committee, told the MSNBC network: “It’s not only tone deaf, it’s borderline blasphemous in light of what happened to Mr Floyd.

Brandon Gassaway, a spokesman for the Democratic National Committee, said: “Trump’s claim is revolting, enraging, disrespectful – a slap in the face and a descent to the lowest possible level of discourse. Trump has no concern or regard for the feelings of anyone and will take every opportunity, even trampling on the memory of George Floyd, to commemorate a jobs report that shows fewer than half of black adults currently have a job and that fully 21 million Americans are unemployed.”