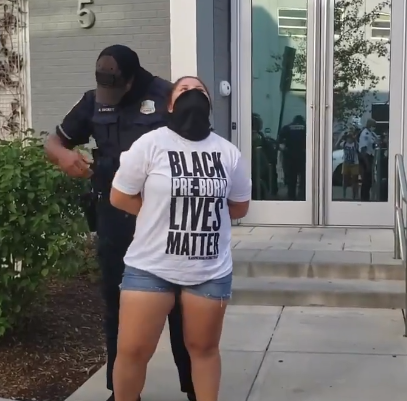 Students for Life of America (SFLA) announced on Twitter that two pro-life activists were arrested outside a Washington, DC Planned Parenthood for writing with chalk on the sidewalk–“Black Pre-born Lives Matter”.

In a video that was tweeted, Warner DePriest and Erica Caporaletti were approached by police, warned and soon arrested.

The pro-life activists say obtained a permit to assemble and a verbal affirmation that their chalk artwork was permitted; however, DC police a permit to put a message on the street was not issued.

The fact that two of our students were arrested for chalking pro-life messages in Washington D.C. shows that government officials are practicing viewpoint discrimination and blocking our free speech rights.

We’ll see you in court. pic.twitter.com/Jb14oN6ik1

The Students for Life of America president stated in an interview,

. . . What was happening was viewpoint discrimination . . . We have a mayor here in Washington, D.C., that painted the streets ‘Black Lives Matter,’ that allowed activists associated with the Black Lives Matter organization to then go without the permit and [in] permanent paint, paint ‘Defund the Police’ . . .