With Brian Schatz (D-HI) and Chris Van Hollen (D-MD), Sen. Paul reintroduced (first introduced in 2015) the bipartisan Stop Militarizing Law Enforcement Act to establish limitations and create greater transparency on the federal transfer of surplus military-grade equipment to state and local law enforcement agencies. This prohibition only applies to offensive equipment and does not prohibit the transfer of defensive equipment, such as body armor.

“For years, I have fought to stop the federal militarization of local police departments. I support our officers, but I do not believe it is beneficial for neighborhoods across the United States to have the same kind of military-grade weapons that are commonly used in Afghanistan. The Stop Militarizing Law Enforcement Act institutes key reforms while ensuring officers still have access to protective equipment so they can do their jobs as safely as possible,”said Sen. Paul.

In addition, Sen. Paul, a long time opponent of no-knock warrants, introduced the Justice for Breonna Taylor Act to prohibit the aforementioned warrants, which allow law enforcement officials to forcibly enter a home without announcing their authority or purpose.

The bill is named in memory and honor of Breonna Taylor, a Louisville resident and EMT who was killed during a police raid on her home in March 2020, which was conducted under the authority of a no-knock warrant.

“After talking with Breonna Taylor’s family, I’ve come to the conclusion that it’s long past time to get rid of no-knock warrants. This bill will effectively end no-knock raids in the United States,” said Sen. Paul.

Despite the above and more, Paul received a cheap shot on Twitter from O’Shea Jackson, aka rapper Ice Cube. 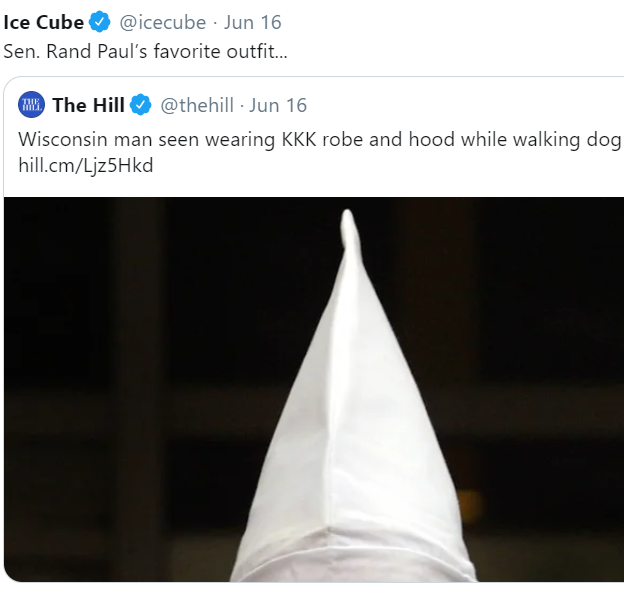 Podcaster and historian, Tom Woods said the following of the tweet: Meanwhile, back to substantive issues, we have Rand Paul, who’s been about as committed to criminal justice reform as anyone could ask for, who’s tried to stop the overseas bombing of nonwhites, and who drafted a bill to stop no-knock warrants. Here’s Ice Cube’s response:

Dan Bongino wasn’t so charitable with Ice Cube tweeting: You’re a fraud. A big chatterbox. Your bullshit act is pathetic and wreaks of weakness and cowardice. Rand Paul put his name on a ballot to fight for things you only tweet about to try to stay relevant. You don’t know shit. And your acting sucks.