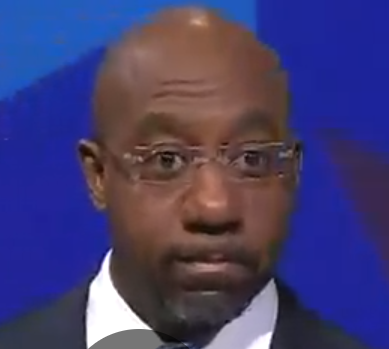 Just like President-elect Joe Biden and Sen. Kamala Harris before him, Reverend and Georgia US Senate Democratic candidate, Raphael Warnock totally sidestepped the question on whether he favored packing the Supreme Court Sunday evening in his debate with Republican Senator Kelly Loeffler.

Warnock was asked by one of the journalists on the panel: “Reverend, if Democrats do win control of the Senate, there would be pressure to increase the size of the Supreme Court. Do you support adding more justices to offset President Trump’s appointments? And do you think there should be term limits?”

Warnock responded by totally avoiding the question: “Kelly Loeffler actually voted to defund the police. She voted against the COPS program. She was one of only 10 US Senators who did. I don’t think we should defund the police but we do need criminal justice reform.  We need to make sure we have an independent review process when civilians die at the hands of police. We need to make sure that police officers and departments that have a pattern of misconduct are held accountable. We can do that and celebrate police at the same time.

“As I move across the state, people are not asking me about the courts and whether we should expand the court. I know that it’s an interesting question for people inside the beltway. They are wondering when in the world they are going to get COVID-19 relief?”

Maybe people haven’t asked him about the courts, but the questioner on the debate panel did–and he totally refused to answer.

Sen. Loeffler did call him out saying, “He is distracting from the fact that he would pack the Supreme Court. That is outrageous. Justice Ginsburg herself said nine justices is the right number. He would pack the court with radical justices that would legislate from the bench to fundamentally override the Constitution and our laws and Georgians need to know that is wrong for Georgia and our country.”