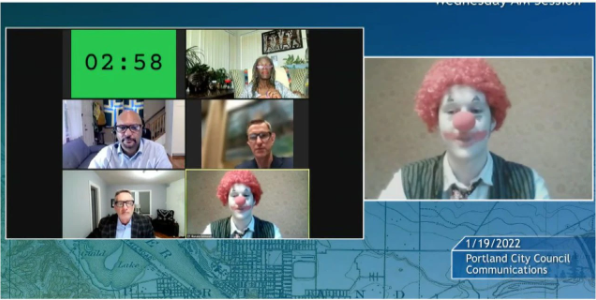 A Portland City Council meeting were met with disruptions Wednesday after a pair of costumed speakers delivered diatribes during separate comment periods, first Ronald Grimaldi dressed as a clown and later a comedian named Alex Stein.

“I, as a member of the Clowning Society of America, would like to nominate [Portland Mayor] Edward Tevis Wheeler for ‘Clown Of The Year,’” said Grimaldi, aka Ronnie the Clown, calling out Mayor Ted Wheeler.

Grimaldi discussed an accident and difficulty getting insurance coverage before focusing on the crackdown on public bussing during the pandemic and the impact to his ability to earn a living.
“The police crackdown on public bussing has forced me to rely on inferior art forms such as miming and [unclear] for alternative incomes,” Grimaldi explains, pointing to the end of the pandemic as a way to return to “gigging as a party clown.”
Then, “speaking from the heart,” Ronnie states that “As a clown, I certainly don’t feel underrepresented in government and law enforcement. It’s just that the measures taken to benefit me and people of my motley profession and identity feel unsatisfactory and inconsequential. Since I know Mr. Wheeler will take great actions after having listened to my statements: “I, as a member of the Clowning Society of America, would like to nominate [Portland Mayor] Edward Tevis Wheeler for ‘Clown Of The Year’.”
Check out the full video below.
Later in the same call, Alex Stein, a Texas-based YouTube comedian, appeared dressed in hospital scrubs and a surgical mask around his neck to deliver a rhyming routine promoting vaccinations against the coronavirus.
2022-01-20
Previous Post: Charlie Crist creates ‘Parents for Crist’ to attack DeSantis, toxic parents
Next Post: Ms Marvel delayed until late 2022