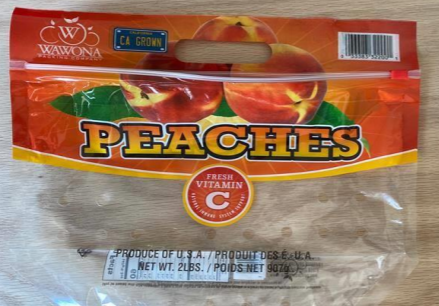 Health officials in the United States and Canada both announced the end of the Salmonella outbreak linked to peaches this week.

In the US, the Centers for Disease Control and Prevention (CDC) said Friday it appears the outbreak is over after a total of 101 people infected with the outbreak strain of Salmonella Enteritidis were reported from 17 states.

The investigation indicated that peaches packed or supplied by Prima Wawona or Wawona Packing Company were the likely source of this outbreak.

In Canada, the Public Health Agency of Canada (PHAC) collaborated with federal and provincial public health partners, the United States Centers for Disease Control and Prevention (U.S. CDC), and the U.S. Food and Drug Administration to investigate an outbreak of Salmonella infections that occurred in two provinces. Given that Salmonella illness reporting linked to this outbreak has significantly decreased over the last four weeks, the outbreak appears to be over and the investigation has been closed.

In total, there were 57 confirmed cases of Salmonella Enteritidis illness linked to this outbreak in two provinces: Ontario (41) and Quebec (16).

Peaches grown in Canada were not associated with this outbreak.