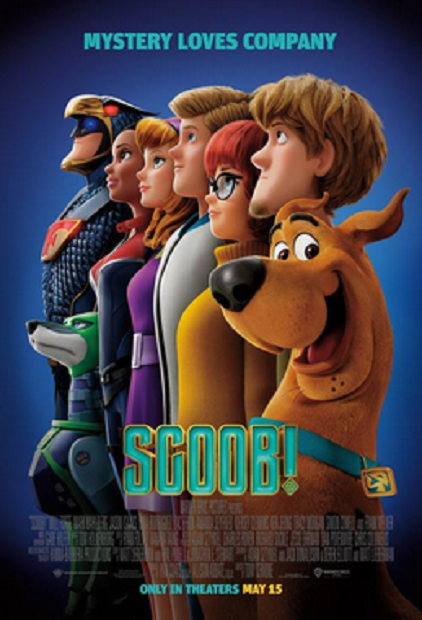 Warner Bros attempted to kick off a Hanna Barbera cinematic universe with Scoob!, a Scooby-Doo prequel/origin story, populated with characters from their various shows: Dick Dastardly from Wacky Races, alongside Muttley; Blue Falcon and Dynomutt and Captain Caveman. Sadly, the long-winded story drifts away from the strong points of the popular cartoon series.

Scoob! starts off with Shaggy meeting the young pup, developing a great friendship before meeting the rest of the gang: Fred, Velma and Daphne. The opening scenes and credit sequence is classic Scooby-Doo, re-creating the iconic open with the computerized characters, and offers up nostalgic references for the fans of the 1970’s original show.

After a time jump, Scoob! centers around Mystery Inc. and a mission by Simon Cowell, who quickly dismisses the comedic duo, creating the tensions to setup the Blue Falcon and Dynomutt introduction (as seen in the trailer footage).

The Falcon (voiced by Mark Wahlberg) is actually the son of the original, Brian, a millennial worried about his social media presence instead of fighting crime, leaving Dynomutt as a harsh critic instead of comic relief.

Dastardly has created an overarching scheme linked to Scooby directly, but this is more of a supernatural plan than the classic cartoons, omitting all of the mystery elements.

Scoob! tried to appeal to segments of the 2020 crowd with Dastardly joking about his first name, a Tinder reference and Falcon used a substitute for the F-word – yes, not the most kid friendly elements.

The film is hindered by the bloated plot, dragging on with complicated sequences, abandoning the fun and campy elements of the Hanna Barbera shows.

The film introduces Dee Dee Sykes (Kiersey Clemons) as the Blue Falcon’s assistant instead of part of the Teen Angels from Captain Cavemen – this just doesn’t work. The clear “girl power” pandering supplants the need for Brian to become a competent crime fighter.

Kids will likely be entertained, but may be bored at times. The first half of the film is sillier and cute than the more serious latter portion.

Fans of the original Scooby shows will miss the antics with Shaggy, who spend the film bickering and angry at one another rather than sneaking sandwiches. running from ghosts or begging for more Scooby snacks.

There are a few great nods to the original material, just not enough. Pay attention to the arcade scene to catch references to Hong Kong Phooey and Laff-A-Lympics (among others).

It was rewarding to hear Frank Welker, who also did the original Seventies toon’s Fred, as Scooby, but was joined by big names: Zac Efron, Gina Rodriguez, Amanda Seyfried and Will Forte as Shaggy – sorry, Matthew Lillard.

Scoob! doesn’t kick off a ton of new films as Warner hoped for, but there could be room for TV show reboots and a revisit to the writing room.