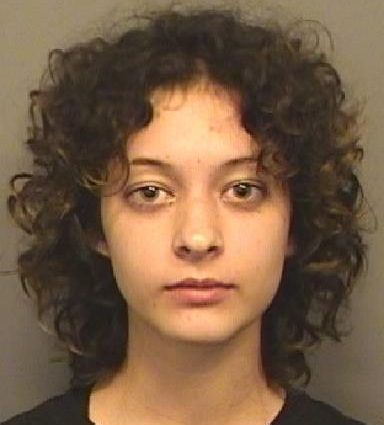 Tampa Police release footage of the incidents which resulted in the arrest of Marli Church and Stephanie Sanchez.

In the footage below, Church, 17, was arrested for holding an umbrella during a march and then trying to jab a bicycle officer with the metal tip of the umbrella. The officer appears to grab the umbrella and then she was taken down and pepper sprayed.

In court, Church told Hillsborough County Judge Catherine Catlin that she’s “scared that I’m going to be painted as the bad guy. I never ever want to do any harm to any person.”

“She provoked these officers. She was trying to poke them with a pointy end of the umbrella,” explained Dugan. “This was certainly intentional, and the misleading part is she looks like a peaceful protester when we go ahead and take her into custody, and moments earlier she was attacking officers.”

I’m a normal kid. I want to stand up against police brutality just like every other person should be,” Church said. “It’s very shocking that I’ve been accused of these things.”

“She had hit a police officer. It was a long spike at the end of the umbrella. She hit a police officer with it a few minutes earlier and then when she came up she was peacefully protesting but we arrested her for what she did prior to that,” said Dugan.

In the same footage, Sanchez can be seen throwing an object at officers. She was identified at the time of arrest HERE.

The chief says his officers have to strike a delicate balance between protecting civil rights and preventing civil unrest.

“They’re devastated. They feel like people hate them. I don’t know what else to say, it’s disappointing to me to see our police officers go through this,” said Chief Dugan.