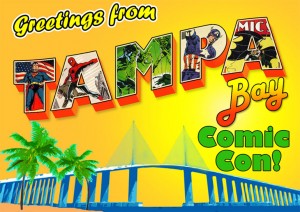 Thousands of fans converge on the Convention Center as Tampa Comic-Con celebrates the various fandoms of pop culture and at the top of that heap is Star Wars.

Star Wars Episode I: The Phantom Menace co-stars Ray Park and Ian McDiarmid spoke before fans, speaking on everything from time in the make-up chair to rumors like to Daisy Ridley’s Rey.

“I enjoyed reinacting stories of my childhood. I didn’t read the books but I enjoyed the comics. I would very much enjoy to come back as Maul,” Park said, as quoted by The Global Dispatch in today’s article.

“My stunt master, Nick, allowed me to show my flips and spins as Darth Maul,” Park explained.

It was McDiarmid, who played Palpatine in both the original and new trilogy, who was asked about rumors that Rey is somehow linked to the Emperor, possible a granddaughter.

“That is a very interesting theory.” Jokingly, he turned to Ray Park, “Ray is this true?”

“It probably isn’t true but that’s up to the directors.”

Park credits the role as Maul for landing him such a long and impressive resume of work: “…I believe, allowed me to get my other roles in X-Men and other films.”

“My life changed in some of the ways you can predict,” McDiarmid said of how the Star Wars role changed his life and career.

However, the great thing with Return of the Jedi, is I could go on to live life because you couldn’t see my face on screen. Once I was just given the hair piece and was announced as the Emperor in the prequels, I was given more attention. Either way, I do spend most of my free time in the theater so it’s not a major issue for me.”

The Tampa Comic Con runs all weekend, for a full list of guests and details, visit the official website: http://tampabaycomiccon.com/

Check out the full panel details over at the Global Dispatch.