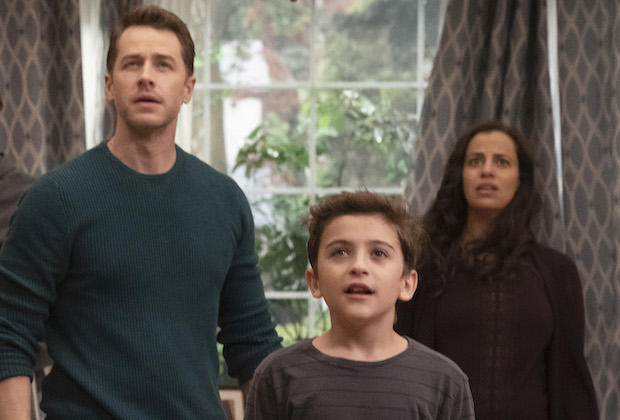 The future of some TV shows are being determined right now, so here’s an update on NBC’s Manifest, ABC’s The Baker and the Beauty and Indebted at NBC.

TVLine reported that NBC has indeed renewed Manifest for a third season.

The supernatural family drama wrapped season 2 with a finale on April 6, concluding a 13-episode season.

TVLine summarized: “Manifest averaged just under a 0.7 demo rating and nearly 4 million viewers (in Live+Same Day numbers), down about 40 percent from Season 1. But with Live+7 DVR playback folded in, Manifest‘s numbers swell to a 1.5 rating and 7.7 million viewers, enjoying as it does some of the greatest delayed viewing of any NBC program.”

Deadline noted “the renewal came down to the wire as the network and the studio, in this case Warner Bros Television, worked out financial details.”

Manifest ranked sixth in the demo.

Influenced by the mystery of Malaysia Airlines Flight 370, Manifest centers around Montego Air Flight 828 landed safely after a turbulent but routine flight, the crew and passengers were relieved. Yet in the span of those few hours, the world had aged five years and their friends, families and colleagues, after mourning their loss, had given up hope and moved on. Now, faced with the impossible, they’re all given a second chance. But as their new realities become clear, a deeper mystery unfolds and some of the returned passengers soon realize they may be meant for something greater than they ever thought possible.

THE BAKER AND THE BEAUTY

ABC has cancelled the romantic dramedy The Baker and the Beauty after one season.

TVLine confirms that the Cuba bakery show will end with just nine episodes.

“Across its nine-episode freshman run this spring, The Baker and the Beauty averaged a 0.47 demo rating and 2.5 million total viewers (in Live+Same Day numbers). Among the 10 dramas that ABC aired this TV season, it ranked last in the demo (behind cancelled fellow freshman Emergence), while only outdrawing the newly renewed For Life in total audience.”

Based on the Israeli series, the remake starred Victor Rasuk (Tom Clancy’s Jack Ryan, How to Make It in America) as Daniel Garcia, a regular Joe who works at his parents’ Cuban bakery in Miami. On the night that his girlfriend Vanessa (Gotham’s Michelle Veintimilla) proposes to him in extremely horrifying fashion by singing Taylor Swift’s “Love Story” in the middle of a fancy restaurant, Daniel bumps into Noa Hamilton (Dynasty‘s Nathalie Kelley), a model-turned-fashion mogul who is coming off a highly publicized split with her cheating actor boyfriend. Thus begins an unlikely romance between the baker and the beauty.

Another freshman family sitcom, Indebted, will also come to an end as TVLine also confirmed NBC will be cancelling that show as well.

“Across its 12-episode run, Indebted averaged a 0.35 demo rating and fewer than 1.6 million total viewers (in Live+Same Day numbers). Out of the seven sitcoms NBC aired this TV season, it ranked next-to-last in both measures, besting only the similarly cancelled freshman comedy Sunnyside. Debuting on NBC in February, Indebted wrapped up its freshman season with an April 16 season finale that will now serve as a series finale.”

It joins Bluff City Law and Sunnyside, which have also both now been officially cut.