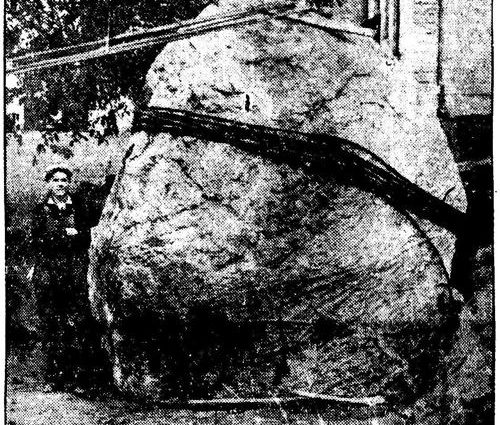 The University of Wisconsin removed a 42-ton boulder from its Madison campus Friday after complaints from students who labeled the rock a symbol of racism.

Chamberlin Rock, which had sat on Observatory Point since 1925, was named after Thomas Chamberlin, a geologist and former university president who served from 1887 to 1892.

A 1925 Wisconsin State Journal article used the n-word as part of a nickname for the giant boulder.

Here’s the first portion of text from the article first published in the Wisconsin State Journal on Oct. 9, 1925:

The big boulder on Observatory hill, which is the largest of its kind in the immediate vicinity of Madison, is now out where folks can look at it.

For centuries the huge granite “niggerhead,” partly visible, has been lying there on the hill, just alongside the cinder drive. For three days a crew of men, with horses, steel cables and capstan of 75-tons pulling capacity have been working to bring it to the surface.

It will be placed at the top of the hill, between the observatory and an Indian mound and faced with a bronze tablet which will set forth its history as prepared by President Emeritus E. A. Birge.

Note that the profanity is in quotations, implying that this was the term used to describe the rock, but some cavalier designation perpetuated by the paper, the university or the people in general.

“It was very meaningful for me to be there and to see the process all the way through to the end,” senior Nalah McWhorter said in a university news release. McWhorter, who was the president of the Wisconsin Black Student Union for the past academic year, was there when the boulder was removed Friday.

“It was about a year ago that we released our demands and met with the chancellor and explained to her why those demands meant so much to us,” she said. “It was a powerful moment today to see this demand come full circle.”

The university had to get permission from the Wisconsin Historical Society to remove the boulder, as it sat within the area of a Native American burial mound, according to the university.

“It took courage and commitment for the Wisconsin Black Student Union to bring this issue forward and to influence change alongside UW’s Wunk Sheek student leaders,” Vice Chancellor for Student Affairs Lori Reesor said in a news release.

“In the midst of demands for justice following George Floyd’s murder last summer, the students wanted change on campus and they worked hard to see this through. While the decision required compromise, I’m proud of the student leaders and the collaboration it took to get here.”

UW student and activist Ayomi Obuseh told CNN affiliate WISC on Friday that removing the rock meant a lot to her and others who fought for its removal. “It’s showing that our hard work isn’t going to waste, that if we keep pushing forward, change can come we’re seeing that with events like today,” she said.

The chancellor’s office is using private donations to pay the $50,000 price tag for the rock’s removal, the university said. It’s being moved to university-owned land near Lake Kegonsa, southeast of Madison.